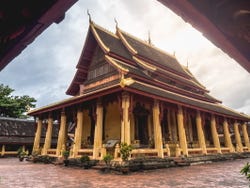 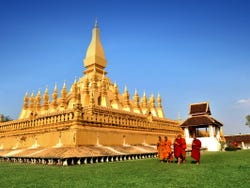 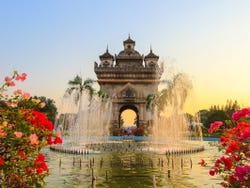 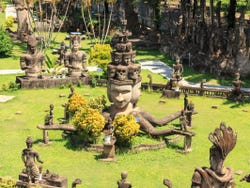 Your private guided tour of the Laotian capital's most important monuments will begin with you being picked up from your hotel.

Firstly, you'll head to Wat Si Saket, located right in the heart of the city centre. This is the only temple that survived the Siamese army's invasion in 1828, making it the oldest temple in Vientiane. Thanks to your expert English-speaking guide, you'll get to hear all about the history of the Buddhist sanctuary as you admire its well-preserved original architecture.

Haw Pha Kao will be the next stop on your route around Vientiane. One of the most colourful and beautiful in the entire city, the former temple was built to house the Emerald Buddha. Nowadays, you'll have to visit Bangkok to see this particular Thai statue, but the building is filled with other religious art and icons, having been converted into a museum.

One of the highlights of the Laos capital and this tour is the visit to Pha That Luang. You'll be left speechless by the sight of the enormous gold-covered Buddhist stupa, not to mention the beautiful gardens, temples and mythological sculptures that surround it. The site is a wonderful example of Laos' fascinating culture, and it has become one of the country's national monuments.

Learn about Laos' more recent history next as you visit Patuxai, Vientiane's "Victory Gate". Reminiscent of Paris' Arc du Triomphe but with typically Laotian carvings, this memorial arch commemorates the victims of the country's war for independence from France.

You'll then take a break from the city centre, heading around 18 miles (30 km) out of Vientiane to find Buddha Park. This peaceful area is filled with more than 200 ornate Buddhist and Hindu religious sculptures and carvings - an incredible sight to behold!

Returning to Vientiane, put the finishing touch on this in-depth cultural tour of the Laotian capital taking a boat cruise on the Mekong River and enjoying the spectacular sight of the sunset over the city and the surrounding mountains.

At the end of your private tour, you'll be dropped back off at your hotel.

When you reserve a private excursion, you'll enjoy the benefit of an exclusive English-speaking guide just for you and your group. What's more, you'll save money if you're in a bigger group.

Private and exclusive tour, there will be no other people in your group.

Free! Free cancellation up to 26 days before the day of the activity. If you cancel under this time or do not show up, you will not be refunded.
like

10 / 10 1 review
Discover Vientiane's cultural, architectural and historic heritage on this guided tour of its beautiful temples and most important monuments.
US$ 63
Book
like

New
If you're traveling to Laos and want to stay connected with your loved ones, with eSIM card you can enjoy 5GB of phone data for 30 days.
US$ 30.50
Book