Embrace the spirit of the ancient Silk Road traders on this 8-day tour of western China - you'll travel all the way from Xi'an to Kashgar!

Embrace the spirit of the ancient Silk Road traders on this 8-day tour of western China - you'll travel all the way from Xi'an to Kashgar! 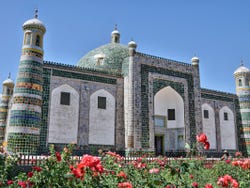 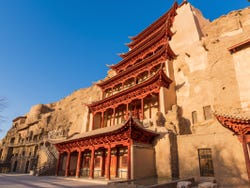 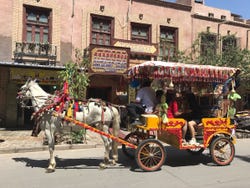 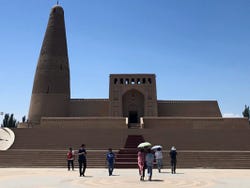 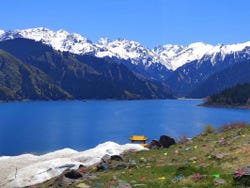 When you land at Xi'an airport, we'll be waiting for you to take you to your hotel. You'll have the rest of the day free to settle into your rooms and rest until the next day.

After enjoying a delicious breakfast at the hotel, we'll set off from Xi'an in a minibus and head east. After an hour's drive, we'll arrive at the Qin Shi Huang Mausoleum, home to one of the world's greatest archaeological treasures: the Terracotta Army.

We'll then leave this impressive monument and return to Xi'an, where we'll take you to visit the ancient city wall, built 600 years ago by the Ming dynasty. Later, we'll enter the Muslim Quarter, full of typical markets.

At the end of the day we'll drop you off at the hotel, where you can relax.

After breakfast, we'll head to Xi'an airport and take a flight to Dunhuang in northern China. Upon arrival, we'll take you to the hotel to settle down. In the afternoon, we'll go on a trip to the Gobi desert, where we'll tour the Mingsha Dunes and see Crescent Lake.

Upon returning to Dunhuang, we'll visit the famous night market, where you can buy some typical products. After this, we'll drop you off at your hotel.

We'll have breakfast at the hotel and head to the Mogao Caves. To find out about the history of these caves, we'll go back in time to the 4th century and admire the paintings and sculptures that are hidden inside.

We'll then go on a two-hour journey to Liuyuan station, where we'll hop on a bullet train to Turfan, a city with a beautiful oasis. Did you know that it is one of the warmest places in China?

Once we've arrived, we'll head to the hotel.

After breakfast at the hotel, we'll head to Bezeklik, known as the Thousand Buddha Caves. These caves carved into the rock are located in the middle of the Flaming Mountains valley and hold some of the region's most precious treasures.

We'll also visit Gaochang, where we'll see the Astana Cemetery. Later, we'll take you to the stunning ruins of the ancient city of Jiaohe. Back in Turfan, we will admire the Emin Minaret, dating back to 1778.

At the end of the tour around the most important places in Turfan, we'll drop you off at your hotel.

We'll get ready for the day with a hearty breakfast and leave the hotel in Turfan to head to Urumchi. After a three-hour trip, we'll reach the capital of the Sinkiang region. There we'll go directly to visit the mummy exhibit at the Xinjiang Museum.

Then we'll head to the Heavenly Lake of Tianshan, a peaceful paradise in the middle of northwest China. Its impressive mountain scenery will leave you speechless! Back in Urumchi, we'll take you back to the hotel.

We'll get up early for breakfast at the hotel and take a flight to Kashgar, an important city of the Silk Road.

Once there, we'll visit the Grand Bazaar, where we'll be immersed in the smell of spices. We'll also visit the old town, where we'll see the Id Kah Mosque and the Apak Khoja Mausoleum, the most important monument in Kashgar. The mixture of cultures in the city will take your breath away!

After the tour through the centre of Kashgar, we'll drop you back at the hotel.

After breakfast at the hotel, we'll take you to Kashgar airport for your return flight.

The price displayed is per person staying in a double room.

The trip includes domestic flights from Xi'an to Dunhuang and Urumchi to Kashgar. These flights are non-refundable once booked. You can see the refund charges applied in the cancellations section, which is shown at the bottom of this page.

Pick up from Xi'an Airport and drop off at Kashgar Airport.

Transport in a minibus.

Bullet train from Dunhuang to Turapn.

You can book up to 2 days before (Xi'an local time) if there are still places available. Book now to guarantee your spot.

No rating yet
Discover China's age-old folklore, gastronomy and traditions with this fantastic dinner and show at the famous Tangle Palace. Not to be missed!
US$ 41.10
Book
like

No rating yet
Discover the impressive Terracotta Army on a tour from Xi'an. Plus, a private tour guide who'll help you to understand its meaning and characteristics.
US$ 175 per group
Book
like

10 / 10 1 review
Discover the history of the Qin Dynasty as you visit the famed Terracotta Army. Plus, you can also combine this with a guided tour of Xi'an City Wall.
US$ 77.10
Book