Travel back in time to Ancient Greece on this day trip to Olympia from Zante. Discover the origins of the Olympic Games as you explore the incredible archaeological site of Olympia. 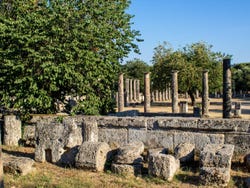 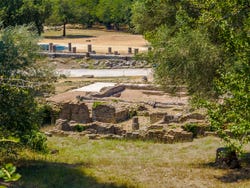 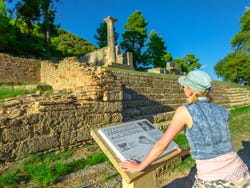 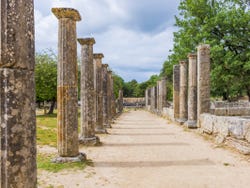 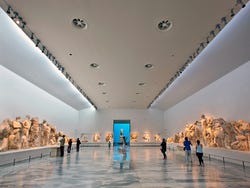 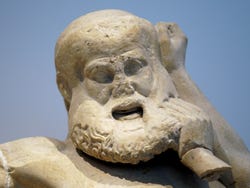 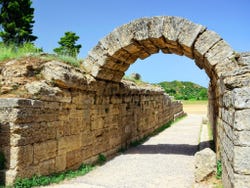 Ready to set foot in the birthplace of the Olympic Games? We'll pick you up from your hotel in Zante at 7 am and set off on a journey to Ancient Greece.

We'll set off by boat from Zante port and sail for an hour and a half until we reach Kyllini. There, we'll board a minibus and head towards the east of the Peloponnese peninsula, where the archaeological site of Olympia awaits us at the foot of Mount Kronos.

Once there, we'll take a guided tour of Olympia and visit some of Greece's most precious archaeological treasures. We'll get to visit the ruins of the Temple of Zeus, one of the seven wonders of the ancient world. Did you know that this sacred place was the model of the classical Greek Doric temples?

Our tour of Ancient Olympia will also take us to see the Temple of Hera, which houses the altar of the Olympic flame. Here, we'll learn about the origins of the Olympic Games going back to 776 BC, the year in which they were held for the first time.

Finally, we'll leave the archaeological site and head to the modern town of Olympia, where you'll have free time to get some lunch at a local restaurant. You can also take the opportunity to visit the museum dedicated to the Olympic Games.

At the end of the day, we'll meet back up and return to Kyllini port to take the boat to Zante. We'll finish the day trip at your hotel at 7 pm.

Transport by minibus and boat.

US$ 74.70
Free cancellation up to 48 hours before the service starts
Book

8 / 10 2 reviews
Make the most of your time on Zante discovering its wildlife: enjoy this half-day turtle watching cruise around the Greek island.
US$ 29.60
Book
like New

New
Enjoy a unique new experience and discover the abundance of marine life off the coast of Agios Nikolaos Beach on this beginner's scuba diving course in Zante.
US$ 77.10
Book
like

8.20 / 10 10 reviews
Paradise beaches, breathtakingly blue seas and mystical natural caves... explore the incredible beauty of the Greek island of Zakynthos on this full-day tour.
US$ 71.20
Book