Admire Alicante’s main monuments and learn about the city’s history and legends on this free walking tour accompanied by an English-speaking guide.

Admire Alicante’s main monuments and learn about the city’s history and legends on this free walking tour accompanied by an English-speaking guide. 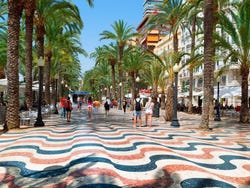 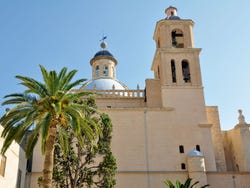 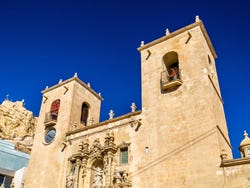 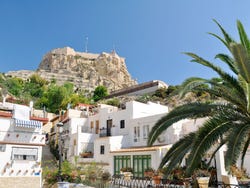 We'll meet at Alicante Town Hall Square at 11 am. There we'll start a free tour of the historic city.

We'll look at the baroque façade of this beautiful 16th century building and then continue walking along the Explanada de España, one of the busiest streets in the city. Did you know that it was built on a dyke?

The tour will continue to the central square Portal de Elche and the Gabriel Miró square, named after one of the town's illustrious sons. Next, we'll go into San Francisco street, where curious figures of mushrooms and rayuelas (small rays) are erected.

Our next stop will be in front of the Teatro Principal, a neoclassical building commissioned by two families, two aristocrats and several merchants in the mid-19th century. We'll also talk about one of Alicante's most important festivities in the Fogueres Museum.

Then we'll see the co-cathedral of San Nicolás de Bari, built on the site of a former mosque, and the convent of the Precious Blood of Christ. We'll visit other places of interest such as the Ferrisa Gate and the Museum of Contemporary Art of Alicante.

Finally, we'll contemplate the Basilica of Santa Maria, the oldest temple in the city, built in Valencian Gothic style. This is the end of the free tour at 1 pm.

On our free tour, we don't accept bookings for more than 6 people. If you're a larger group, please book a private tour of Alicante.

Guide specialized in the history of Alicante.

You can book up until 30 minutes before the activity as long as there are still places. Book now to guarantee your spot.

The guide was learned enough and very good. He helped us for everything. Please send the group photo.

Informative, enjoyable and a little gentle humour. Gave insights to the people of the city as well as its history. Just right for us. Also very helpful with other tips and hints so we got the best out of our visit.

Our tour guide, Moises, did an excellent job for my husband and me. We were the only two tourists during the tour because the other 2 people were no-shows. Moises' service very much exceeded our expectations. We understood that he depended upon the after-tour tips, and we believe that our tip did not disappoint him because we treated it as a private tour. Alicante is really a very culture-rich city. I whole-heartedly recommend everyone to visit the city if he/she is in the area.

The guide Jose, has explained everything to us very well. A recommended visit and that we liked. Opinion translated. Show original.

No rating yet
Do you want to learn how to make a delicious, authentic paella? With this cooking class, you'll become a true expert... and you'll go home with a full stomach!
US$ 57
Book
like

10 / 10 1 review
Visit one of the most beautiful villages in Spain with this Guadalest & Algar Fountains Day Trip. You'll enjoy the amazing waterfalls and impressive scenery.
US$ 68.40
Book
like

No rating yet
Discover the attractions of two charming villages in Alicante that will impress you with this Villajoyosa & Altea Day Trip. You'll visit a chocolate factory.
US$ 62.70
Book