Explore the Medieval fortresses of the Middle East on this guided tour of the desert castles of Jordan from Amman. You'll also get to bathe in the Dead Sea!

Explore the Medieval fortresses of the Middle East on this guided tour of the desert castles of Jordan from Amman. You'll also get to bathe in the Dead Sea! 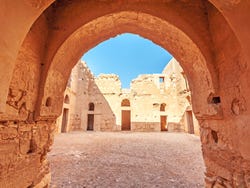 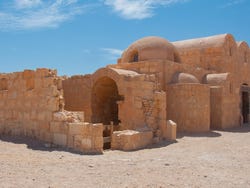 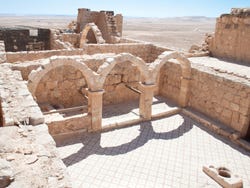 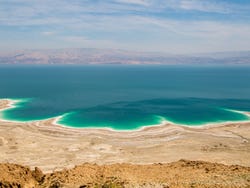 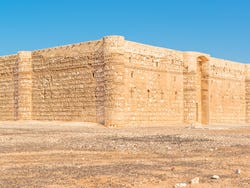 After picking you up from your hotel in Amman, we'll set off to the east of Jordan to discover some of the most emblematic desert castles in the Middle East. These fortresses, built between the 7th and 11th centuries, were used for various purposes, from defensive posts to caravanserais and palaces.

Firstly, we'll visit the Qasr Kharana, constructed under an early Umayyad caliph, making it one of the first examples of early Islamic art and architecture. Strolling through the courtyard and the different rooms, we'll observe the details indicating Roman, Byzantine and Sassanid influences in its design.

We'll then head to Qasr Amra, a UNESCO World Heritage Site. Inside the Medieval palace, you'll be able to admire a number of detailed 8th century frescoes showing hunting scenes, portraits of rulers and a map of the zodiac.

The last stop on our tour of the desert castles of Jordan will be Qasr al Hallabat, a fortified complex built atop an ancient Roman fortress and dating back to at least the 2nd or 3rd century. Learn all about the history of the castle, which was enlarged by the Umayyads in the 8th century when they built a mosque outside and added defensive towers, while you marvel at the spectacular mosaics decorating its architecture.

Having explored the castles to our hearts' content, we'll make our way to the Dead Sea, the salt lake bordered by Jordan, Israel and Palestine that happens to be Earth's lowest point on land. Its high salt levels prevents life from growing in the lake, hence its ominous name.

Enjoy lunch at a restaurant next to the Dead Sea (not included), before having free time to take in the beautiful landscapes or to float in its salty waters, which have been used for cosmetic and medical treatments for thousands of years.

At the end of the day trip, you'll be dropped back off at your hotel in Amman.

This tour does not include the entrance fees to the desert castles and monuments that we'll visit. These should be paid on the day (approximately 10 US Dollars per person).

No rating yet
Discover the magic of Jordan on this four-day tour of its natural and historical treasures: explore Petra, the Dead Sea and the Wadi Rum desert.
US$ 670
Book
like

No rating yet
Amman, Petra, Wadi Rum and the Dead Sea are the jewels in Jordan's crown: discover the best of the beautiful historic country with this eight-day tour package!
US$ 840
Book
like

No rating yet
Discover the incredible mosaics of Madaba and enjoy the panoramic views of the Holy Land from Mount Nebo with this trip to Jordan's biblical past.
US$ 347 per group
Book