A cruise on the Nile is something no traveller to Egypt should miss. You'll feel the power of the river that gave life to the Egyptian empire, from the deck of a traditional felucca boat.

A cruise on the Nile is something no traveller to Egypt should miss. You'll feel the power of the river that gave life to the Egyptian empire, from the deck of a traditional felucca boat. 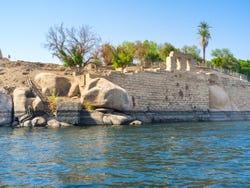 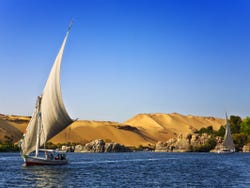 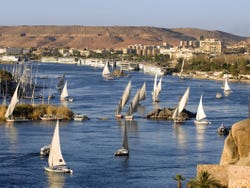 You'll climb on board the felucca, a traditional Egyptian boat with distinctive birdlike wings, to begin a tranquil hour and a half cruise on the majestic waters of the Nile, one of the longest and most famous rivers in the world. This is the river so intimately linked with the life and livelihoods of the Egyptian people over centuries, the 6,000-kilometre river with its enigmatic source, and symbol of the country that nonetheless crosses 10 different nations on its winding route to the sea.

Throughout the hour and a half on board, you'll enjoy some of the most emblematic spots on the banks of the Nile: the famous Elephantine, whose shape from above closely resembles that of an elephant, and Kitchener Island, also known as the Aswan Botanical Garden, whose plant species have, throughout the years developed into a green oasis in the middle of the Egyptian desert.

With the route over, and yourselves still well and truly in love with the magic of the Nile, the tour returns to the departure point in Aswan.

10% discount on the official ticket price.

8.20 / 10 157 reviews
No trip to Egypt would be complete without a cruise on the Nile, the most memorable experience on a memorable trip. This 3 day cruise goes from Aswan to Luxor.
US$ 290.40
Book
like

7.60 / 10 25 reviews
On this excursion we'll visit the astonishing temples of Abu Simbel, the only monuments in Egypt that can hold a candle to the grandiosity of the three pyramids of Giza.
US$ 89.60
Book
like

8.70 / 10 3 reviews
Travel back in time sailing past Ancient Egyptian temples on this four-day cruise on Lake Nasser. Explore Abu Simbel, Kalabsha and more!
US$ 560.40
Book