Step inside Antoni Gaudí’s creative world by booking skip the line tickets to Casa Milà, also known as La Pedrera, accompanied by an audioguide in English to learn all about this fascinating building. 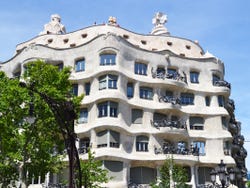 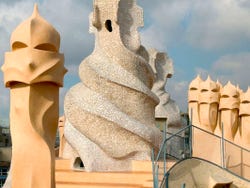 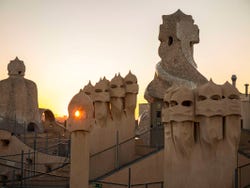 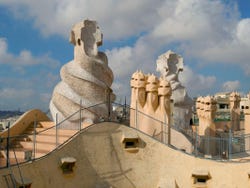 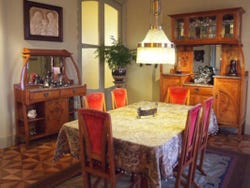 This modernist building was commissioned by the Spanish politician and businessman Pere Milà I Camps to the brilliant Catalan architect Gaudí in 1906. It is officially called Casa Milà, but is popularly known as La Pedrera, meaning “stone quarry” in Catalan because of its uneven outer appearance.

Skip the lines and walk straight in. Accompanied by your audioguide in English, wander through the building’s various rooms included in UNESCO’s World Heritage list in 1984. You can also visit Espacio Gaudí (an interpretation center dedicated to the architect), the exhibition halls and colourful patios. The fourth floor houses a recreation of an early twentieth-century bourgeois house.

One of La Pedrera’s highlights is its rooftop, an exceptional observation deck over Barcelona. The top terrace is also extremely popular because of its “warrior chimneys”, which inspired the design of Star Wars’ imperial helmets. These original aspects make it one of the most photographed part of Casa Milà.

The audioguide tour lasts approximately 90 minutes. At the end, you can continue to explore Casa Milà at your own leisure, revisiting your favourite rooms.

You can also choose to visit La Pedrera at nighttime. This admission includes an audio-visual show projected on the building’s chimneys.

The tour is carried out with an audio guide in English.

US$ 26
No hidden fees or surcharges
Book

9.50 / 10 479 reviews
Explore the historic center of Barcelona accompanied by an expert English-speaking guide on a free walking tour and delve into the rich history of the second largest city of Spain
Free!
Book
like -8%, Skip the line

8.70 / 10 163 reviews
Delve into Antoni Gaudí’s creative world by visiting the architect’s most important landmarks in Barcelona, including the Sagrada Familia and Casa Batlló.
US$ 90.20
Book