The Buenos Aires graffiti tour serves as an introduction to the artistic, political, and revolutionary mix of the Argentinian capital via its stunning and thought-provoking murals. 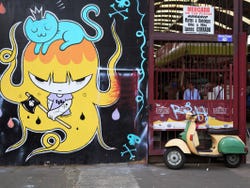 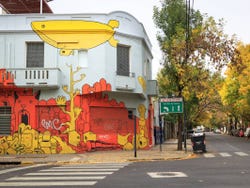 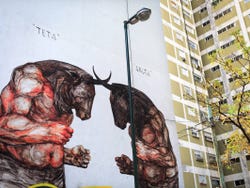 The Palermo area of Buenos Aires is, as well as being the largest neighbourhood in the city, also its most artistic. It is home to the Museum of Latin American Art, artisanal markets selling artworks and more, and a fantastic collection of murals and graffiti.

It's from Plazoleta Julio Cortazar, home to some of these delightful markets, that you'll begin your tour of the city's most impressive graffiti, passing through Palermo's Roussel and Santa Rosa as well as Gorriti and Lavalleja in search of the best street art in the city.

Your local guide will explain the long connection between this art form and the city itself: from the early 20th century, when painters would be paid to daub the walls of the city with a variety of political slogans, to the arrival of the aerosol can in the 1960s, repression under the dictatorship in the 1970s and 1980s and the revival of the art form since.

From 2014, with the worldwide proliferation of graffiti as an art form, the city government has invited local and international artists to decorate the streets of Palermo, resulting in an explosion of colour. See murals by Grolou and Dame, Adrián Escandar and Alfredo Segatori, as well as the Worldwide Wall (a different kind of street art based on stickers, and an international collaborative effort).

Throughout your guide will immerse you in the graffiti culture of the city, as you marvel at works which twist reality, integrate native culture, and bring colour and life to the city.

The tour comes to an end around 5 pm, on the corner of Gorriti and Lavalleja.

You can book up until the same day (2:00 PM local time) if there are still places available.

7.40 / 10 13 reviews
If you find yourself in the wonderful city of Buenos Aires then a boat trip along the River Plate is simply an unmissable experience.
US$ 27.50
Book
like

9.30 / 10 12 reviews
Discover the best spots in Buenos Aires with this private tour around the capital city with a private guide for you, your partner, family or friends.
US$ 175.60 per group
Book
like

9.40 / 10 7 reviews
Experience Argentinian culture with its most characteristic dance at this Tango show at the Astor Piazzolla Theatre.
US$ 37.60
Book