This Recoleta Cemetery tour takes you around one of the must-see sights in Buenos Aires, an open-air museum paying homage to the dead of the city with over 4,000 mausoleums.

This Recoleta Cemetery tour takes you around one of the must-see sights in Buenos Aires, an open-air museum paying homage to the dead of the city with over 4,000 mausoleums. 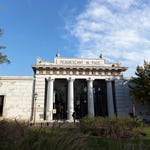 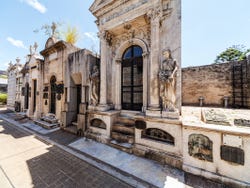 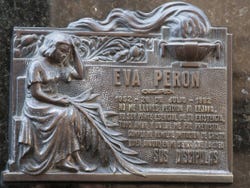 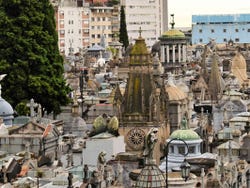 Join your guide at the cemetery gates and take a guided tour of what could be considered the most unusual and one of the most beautiful neighbourhoods in the city, but populated only by the dead...

Laid out like city blocks, the cemetery has over 4,000 monuments to the dead, occupying 54,000 square metres. Each one is carefully designed, with style varying with fashion over the long history of the burial site, in operation since 1732. Art Deco rubs shoulders with Baroque, Art Nouveau and Neo-Gothic: an eclectic mix that has lead the La Recoleta Cemetery to be named a "National Monument" in Argentina.

Over almost two hours, your guide will lead you around the most famous and important graves in the cemetery, including Evita Perón, who in the first half of the twentieth-century became a national symbol in Argentina and found international fame after her death with the 1976 musical Evita. In front of her resting place we'll tell you the tragic story of her death, and how her embalmed body once disappeared...

Through the stories of those buried here you'll be immersed in the history of Buenos Aires, learning about "The Wild Bull of the Pampas", the "Knights of the Night", "The Sailor and his Daughter" and more.

The tour ends at the cemetery gate around 4:45 PM.

€ 8.60
Free cancellation up to 24 hours before the service starts
Book

Victoria tour was amazing. We were about to begin and a sudden storm began to fall. She kept calm and advised to found some shelter in the entrance area. Once we restart the tour, she was eloquent, fluid and entertaining giving facts, urban legends and maintaining a distance from the political aspect in every graveyard she talked about. Many fun facts, I remember most the spouse that asked specifically that a bust or any statue built in her honor must be fsce opposite sides of her husband

9.50 / 10 281 reviews
Want to know the origin of the Argentinian capital? This free walking tour of Buenos Aires is the best way to get to know its historic centre.
Free!
Book
like

9.20 / 10 13 reviews
Discover the best spots in Buenos Aires with this private tour around the capital city with a private guide for you, your partner, family or friends.
€ 217.70 per group
Book
like

10 / 10 1 review
The La Boca walking tour takes you around one of the most colourful and traditional neighbourhoods in Buenos Aires, where the people breathe football and tango
€ 8.60
Book