Discover the hidden secrets of one of Thailand's most sacred temples, Wat Doi Suthep, and admire the elegant Bhubing Palace on this four-hour guided tour from Chiang Mai.

Discover the hidden secrets of one of Thailand's most sacred temples, Wat Doi Suthep, and admire the elegant Bhubing Palace on this four-hour guided tour from Chiang Mai. 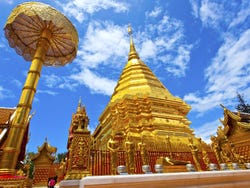 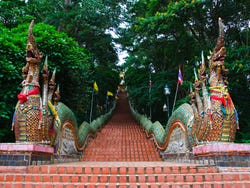 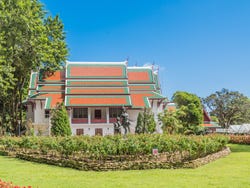 Your English-speaking tour guide will pick you up from your hotel, ready to leave the lively city behind and make your way into the tranquillity of rural Thailand. Your first stop will be the most sacred temple in northern Thailand, the hilltop Wat Phra That Doi Suthep, or Doi Suthep as it's known for short. Gleaming gold leaf adorns the ornate Buddhist complex and its beacon-like stupa, which is home to a relic of Buddha, making it a pilgrimage centre of thousands of devotees every year.

To reach the lofty heights of the temple, you'll have the choice between travelling by tram (not included), or climbing the 306 steps up to the peak. Guarded by two dragon-like serpents known as "naga", the ascent up the vibrantly colourful stairway is supposed to earn believers Buddhist merit. At the top, as well as being dazzled by the beautiful Doi Suthep temple complex, you'll also have spectacular views over the lush greenery of the valley and the city of Chiang Mai.

Head to the nearby Bhubing Palace next. The winter residence of Thailand's royal family, this peaceful building, constructed upon stilts, is an excellent example of Thai architecture. It  is surrounded by beautiful grounds including a rose garden, which thrives up in the cool mountain air, unusually for the country's tropical climate.

Following your guided tour of these two wonderful sights, you'll be taken back to your hotel in Chiang Mai for around midday.

To enter Chiang Mai's Buddhist temples you must follow their dress code. We recommend wearing closed shoes, and modest clothing that covers shoulders, knees and ankles. It is not permitted to enter temples wearing short pants or skirts.

Tram to the peak of Doi Suthep.

You can book up to 2 days before (Chiang Mai local time) if there are still places available. Book now to guarantee your spot.

7.50 / 10 89 reviews
If during your trip in Bangkok you want to connect to the Internet and keep in touch with your family and friends, this card is perfect for you.
US$ 18.50
Book
like

No rating yet
Discover the wonders of the city of 300 temples with this Chiang Mai Guided Tour. Get to know the most remote areas of the city.
US$ 69.70 per group
Book
like

10 / 10 2 reviews
This unique experience caring for, feeding and bathing the Thai elephants at this sanctuary in Chiang Mai will leave you lost for words!
US$ 51.50
Book