Immerse yourself in Thai Buddhist religion and culture on this tour of Chiang Mai's temples and learn about meditation, karma, nirvana and more! 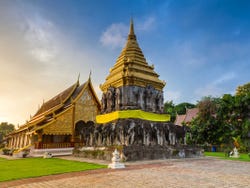 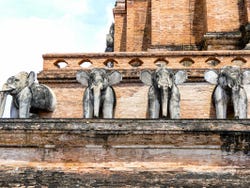 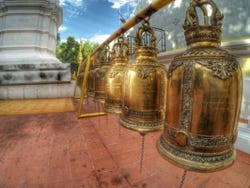 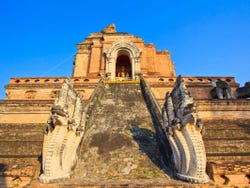 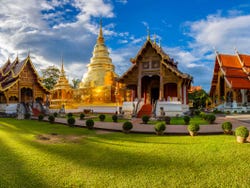 At 1 pm on the day of the tour, we'll pick you up from your hotel, ready to begin exploring five of Chiang Mai's most important temples. Firstly, we'll visit the magnificent Wat Suan Dok, also known as Wat Buppharam, home to the cemetery of Chiang Mai's historic royal family.

Next, we'll make our way to Wat Prah Singh, a sacred temple dating back to the 14th century and known for its spectacular architecture. We'll get to hear about Buddhist culture and philosophy as we admire its lovely buildings.

We'll then head onwards to Wat Chedi Luang Temple. Did you know that when it was built in the 15th century it was the largest building in the historic Kingdom of Lanna? Our next stop will be Wat Chet Yot, named in Thai for its seven spires.

Finally, we'll visit the enchanting Wat Chiang Mun Temple, whose elephant sculptures are a true highlight of the traditional architecture set against a leafy jungle backdrop.

This tour of Chiang Mai's temples will come to an end with drop off back at your hotel after around 4 hours.

8.90 / 10 14 reviews
Meet the friendly Thai animals with this Elephant Sanctuary + Rafting Day Trip. You'll also get your adrenaline pumping along Mae Taeng River.
US$ 82.30
Book
like

10 / 10 1 review
Discover the wonders of the city of 300 temples with this Chiang Mai Guided Tour. Get to know the most remote areas of the city.
US$ 72.50 per group
Book
like

9.50 / 10 135 reviews
This unique experience caring for, feeding and bathing the Thai elephants at this sanctuary in Chiang Mai will leave you lost for words!
US$ 53.60
Book