See a romantic sunset at one of the most iconic archaeological sites on Easter Island on our Ahu Tahai Sunset Excursion. You'll see the famous Maoi statues up close against the backdrop of a beautiful sunset.

See a romantic sunset at one of the most iconic archaeological sites on Easter Island on our Ahu Tahai Sunset Excursion. You'll see the famous Maoi statues up close against the backdrop of a beautiful sunset. 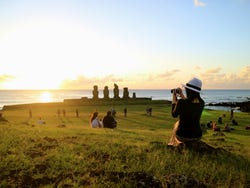 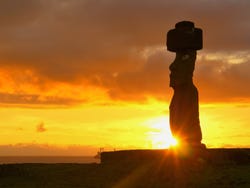 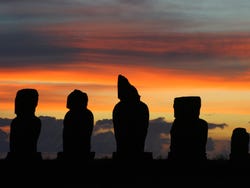 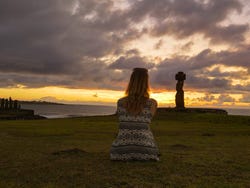 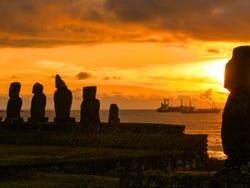 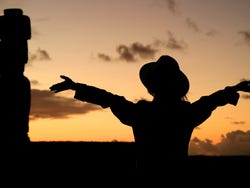 At the scheduled time, we'll pick you up from your hotel on Easter Island and drive north towards Hanga Roa. Located in the outskirts of the island's capital, we'll find the Ahu Tahai ceremonial complex, an important archaeological site with colossal moai statues.

We'll arrive at this ancient Rapa Nui sanctuary in the late afternoon, just in time to see the sunset over Ahu Tahai. The sunset will cast a purple, scarlet and orange haze over the moai, creating one of the most striking and unforgettable sunsets on Easter Island.

As we watch the sun set over the horizon, we'll learn about the history of Tahai. This archaeological complex is divided into three ahus, which are ceremonial platforms. These are Ahu Ko Te Riku, Ahu Tahai and Ahu Vai Ure. Only a single moai remains on the first two, but the third has five colossal structures lined up along the western coast of the island with their backs to the Pacific Ocean.

The mysteries behind Ahu Tahai are innumerable. For example, what was the significance of these statues, and why do some moai have a kind of cap on their heads while others don't? We'll attempt to unravel these intriguing mysteries little by little in the light of dusk.

After 2 magical hours at Ahu Tahia, we'll return to your hotel.

You'll need to buy your own ticket to the Rapa Nui National Park, as it isn't included in the price of this activity. You can acquire tickets at the following places on Easter Island:

This ticket is valid for 10 days from the first use.

Entry to the Rapa Nui National Park: US$ 83 per person.

Free! Free cancellation up to 12 hours before the activity starts. If you cancel under this time or do not show up, you will not be refunded.
like

8 / 10 1 review
Explore Easter Island on this complete tour which takes you from the magical Ahu Akahanga to beautiful Anakena beach.
US$ 108
Book
like

New
Explore the ocean's seabed for the very first time on our Easter Island Beginners Scuba Diving Lesson. These crystal clear waters in the middle of the Pacific Ocean are perfect for beginners.
US$ 177.50
Book
like

New
Discover the highest peak on Easter Island on our Terevaka Volcano Day Trip. We'll explore the surroundings of this extinct volcano and either go on a hike or a horse ride - your choice!
US$ 117.50
Book