Climb on a bicycle and join us on a fun tour of Ferrara, declared a World Heritage Site by UNESCO for its beauty and cultural importance. Ride along the narrow streets, discover the iconic landmarks, and feel the influence of the House of Este dynasty which ruled over the city from 1240–1597. Let this medieval city conquer your imagination! 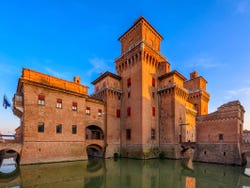 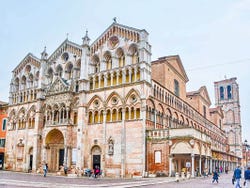 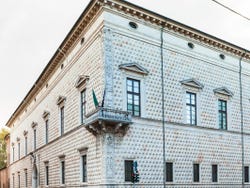 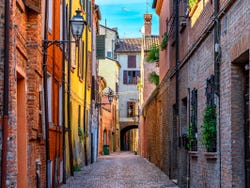 We will depart from the meeting point at 9:30 am or 5 pm, depending on your selection, to start our exploration of Ferrara. This ancient city seems to have been taken straight out of a fairy-tale. Our first stop will be at the river Po, which is the soul of the city.

We continue at the Ferrara Cathedral of Saint George the Martyr (Cattedrale di San Giorgio Martire), where we will admire its Romanesque façade covered in intricate engravings. Simply by turning around, we will find ourselves in front of the City Hall where we will learn all about the history of the most influential family in the city – the Este dynasty.

Later, we head into the narrow alleyways of the Jewish quarter to find out what links this community to the House of Este. Then we walk down the Via delle Volte, a street which runs through the medieval heart of the city. As we pass under its beautiful old arches you will hear all about the fascinating history of this magical part of Ferrara.

An obligatory stop on our tour is the majestic Este Castle, which stands out for its four defensive towers and the water moat which surrounds it. This is a genuine medieval fort right in the centre of the city!

We continue the tour at the popular Diamanti Palace, one of the most important constructions from the Italian Renaissance. We will pause here to enjoy the exterior of this building which consists of 8500 marble blocks carved into the shape of diamonds.

US$ 45.90
Free cancellation up to 48 hours before the service starts
Book

Competent guide, he immediately showed great empathy for our 11 year old girl. Path suitable for everyone. I highly recommend it to experience and get to know the city like the people of Ferrara: by bicycle Opinion translated. Show original.

9.50 / 10 13 reviews
Discover all the secrets and the most fascinating monuments around one of the most important medieval cities in Italy when you take this tour of Ferrara.
US$ 41.10
Book