Cross to Tenerife from Gran Canaria and spend a magical day in Loro Parque, one of the best zoos in Europe packed with exotic animals, including parrots, dolphins and killer whales! 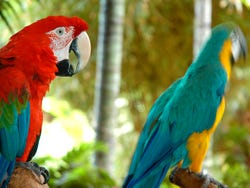 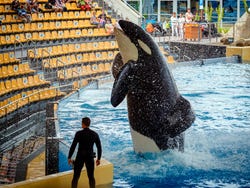 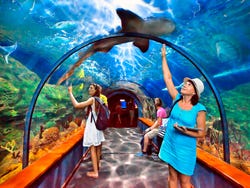 First thing in the morning, head to Puerto de las Nieves, in Agaete, on an air-conditioned bus. From there, you will board a Fred Olsen ferry to Santa Cruz de Tenerife.

As soon as you get to the capital of Tenerife, get on a bus and enjoy the striking landscape of Tenerife as you are driven to Loro Parque, in Puerto de la Cruz. Upon arrival, you'll have six hours to explore this theme park and its spectacular attractions.

One of the park’s most popular shows is the Parrot Show. These beautifully colored birds will surprise you as they ride a tricycle among many other incredible things. We also highly recommend the Dolphin Show, full of tricks and captivating jumps. If you have enjoyed watching the dolphins, don’t miss the Killer Whale Show. Watching these enormous orcas somersault is an unforgettable experience.

The zoo also houses many other animals like seals, penguins, orangutans and tigers. It also accommodates striking green spaces, including a jungle and a large orchid garden, as well as an original cactus park, home to the well-known Canary Islands dragon tree.

In the afternoon, a chauffeur will be waiting for you at the exit of Loro Parque to take you back to the Port of Santa Cruz de Tenerife, where you will take a ferry back to Gran Canaria. Once you disembark you will be driven to the various resort areas in the island.

You must show your passport to get on both ferries.

After booking the activity, the local supplier will send you an email with the exact pick-up location and time.

Check out our Tenerife self-guided day trip if you are interested in booking a full-day self-guided tour of Tenerife, where you have the chance to explore the island’s capital and surroundings at your own leisure.

Return transportation to and from Port of Santa Cruz de Tenerife and Loro Parque.

You can book up to 2 days before (Gran Canaria local time) if there are still places available.

US$ 109.10
No hidden fees or surcharges
Free cancellation up to 24 hours before the service starts
Book

7.20 / 10 5 reviews
Spend a great Sunday in Gran Canaria by visiting the famous Teror and San Mateo open-air markets. These two quaint villages are also well-worth discovering on this half-day trip.
US$ 25.30
Book
like

9.80 / 10 12 reviews
Immerse yourself in the underwater life of Gran Canaria with this incredible snorkelling experience. Swim with marine wildlife at Las Canteras Beach.
US$ 38.50
Book
like

8.10 / 10 42 reviews
Make the most of your trip to Gran Canaria, discovering the underwater life around the south of the island on board a yellow submarine.
US$ 34.70
Book