Check out all the activities in Gran Canaria

Take a ferry to Tenerife, the largest island of the seven Canary Islands, and spend a whole day at your own leisure exploring the capital’s attractions and sampling its exquisite food. 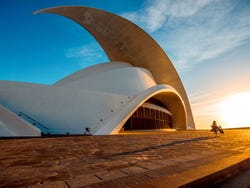 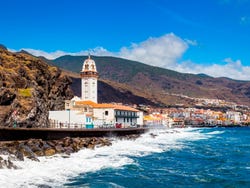 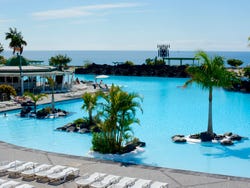 First thing in the morning you will be driven to Agaete, situated in the northeast of Gran Canaria. From its port, Puerto de las Nieves, you will embark on a Fred Olsen ferry to Tenerife.

After an 80-minute journey you will get to the capital of Tenerife. Once you disembark, you will spend the day in Santa Cruz de Tenerife, discovering the city at your own pace. Very close to the wharf is one of the most avant-garde monuments of the city: the iconic Adán Martín Auditorium. Nearby, is the Parque Marítimo César Manrique, an entertainment complex made up of several salt-water swimming pools.

The green lung of Santa Cruz de Tenerife, García Sanabria Park, is not very far from the harbor. This “parque” is famous for its ample variety of trees and exotic flowers. You can also head to the nearby town of San Cristóbal de La Laguna, a World Heritage site. The easiest way to get there is to take a 40-minute tram ride from the port that will leave you in the center of La Laguna, renowned for its impressive colonial buildings.

If you prefer, you can stay in Santa Cruz de Tenerife and try its mouthwatering tapas. Don’t forget to try the typical papas arrugadas with mojo picón sauce. If you love to shop, we recommend you head to Plaza de la Candelaria and its surroundings. Here, you’ll find numerous boutiques and international brands.

In the afternoon, head back to the Port of Santa Cruz to take the ferry back to Gran Canaria. When you come ashore at Puerto de Las Nieves, a bus will be waiting for you and will drop you off near your hotel.

You must show your passport to get on both ferries.

After booking the activity, the local supplier will send you an email with the exact pick-up location and time.

This excursion includes a return transfer service from and to your hotel in Gran Canaria and Puerto de Las Nieves and the return ferry tickets to and from Tenerife. Once you get to Santa Cruz de Tenerife, the food, guided tours, public transport and tickets to the monuments, etc are not included in the price of the tour.

If you wish to visit one of the most famous zoos in Europe, you can book this Excursion to Tenerife Loro Parque. The theme park includes numerous animal shows with dolphins, killer whales, seals and parrots, as well as other entertaining attractions.

US$ 82.10
No hidden fees or surcharges
Free cancellation up to 24 hours before the service starts
Book

Check out all the activities in Gran Canaria

8.20 / 10 11 reviews
Discover the amazing marine life of Gran Canaria onboard a boat with a transparent deck . You will sail alongside wonderful dolphins and whales.
US$ 41.60
Book
like

8.70 / 10 11 reviews
Travel by buggy at full spee through the south of Gran Canaria at full speed. You will cross paths, mountains and roads enjoying spectacular landscapes.
US$ 113
Book
like

Guided tour of the Cathedral of Santa Ana + Columbus House

No rating yet
Explore the old town of Las Palmas with this fantastic tour of Vegueta. You will enjoy a fab tour of the Santa Ana Cathedral and the House of Columbus.
US$ 26.10
Book