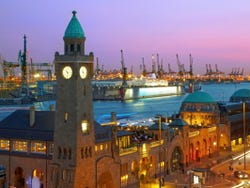 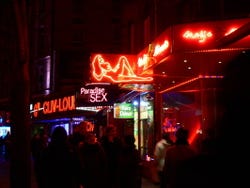 The tour meets in front of the clock tower on Brücke street, next to the Hamburg port. Before diving into the heart of the red light district, we will pass through the country's most important port. At over 800 years old, this port is known as "Germany's gate to the world" and symbolises the prosperity and economic growth of the city in the 18th century. We will pass by the Landungsbrücken pier, the fish market and learn about the Soviet spy submarine U-434.

Around the corner from the port can be found the most unusual, suggestive and striking neighbourhood in the city. The Red Light District is home to sex shops, strip clubs, cocktail bars and colourful lights which are sure to immerse you in their unique atmosphere. We'll also pass through the famous Herbertstraße and Reeperbahn, known as the "sinful mile".

The visit will also uncover the cultural importance of this neighbourhood. In the 60s, five young men from Liverpool would try their luck in the bars and clubs of the Red Light district, and only a little while after the Beatles would become one of the most celebrated bands in the history of pop music! We will pass through the square which today bears their name and remember other great musicians who took their first steps in Hamburg.

To finish the tour we will take in Hanz Albers Platz, Nobistor gate and the Davidwache police station - leaving you in the Red Light District region.

If there are still places available, you can book until the previous day (local time in Hamburg).

US$ 16.40
No hidden fees or surcharges
Free cancellation up to 6 hours before the service starts
Book

9.50 / 10 1,615 reviews
Discover the essence of Hamburg with this free tour. Walk in the footsteps of pirates and live the bombardments of World War II.
Free!
Book
like

8 / 10 5 reviews
Explore Hamburg’s emblematic sights and neighborhoods, including the Port of Hamburg and and the Speicherstadt neighborhood on this private tour.
US$ 141.90 per group
Book
like

6.30 / 10 6 reviews
Why did five musicians from Liverpool decide to try their luck with Hamburg's lively nightlife? Discover the party atmosphere of this German city on a pub crawl.
US$ 13.10
Book