The archaeological site of Ephesus is home to the incredible remains of one of the most fascinating cities from Antiquity. Explore the Library of Celsus and more on this day trip from Kusadasi! 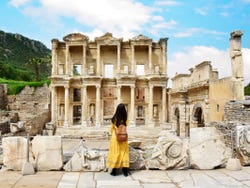 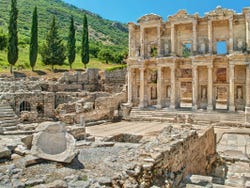 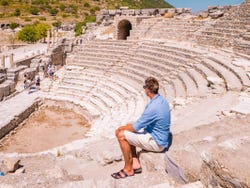 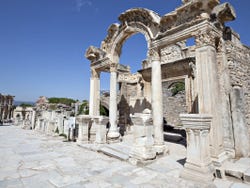 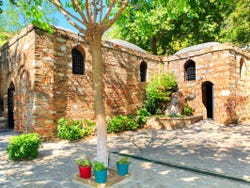 Having been picked up from your hotel in Kusadasi, you'll set off for your adventure into Antiquity, heading inland towards to the Turkish province of Izmir.

The first stop on your tour will be at the historic Catholic Shrine known as the House of the Virgin Mary. According to tradition, it was here that Saint John brought Mary, the mother of Jesus, after his crucifixion. During your visit, you'll learn all about the history that makes this place so venerated.

Heading north, you'll embark on a guided tour of the Ephesus archaeological site, home to the well-preserved ruins of one of the most splendid cities from Antiquity. As you explore the ancient city, a UNESCO World Heritage Site, you'll be left speechless by its spectacular monuments. The Library of Celsus is a particular highlight: one of the most impressive buildings in the Roman Empire, it was built to serve as the mausoleum for Tiberius Julius Celsus as well as to store more than 10,000 scrolls.

Your guide will then take you to the majestic Temple of Hadrian and the Roman Theatre of Ephesus, which is in an exceptional state of conservation.

At the end of your visit to Ephesus, you'll head to the nearby town of Selçuk, where you'll enjoy a well-deserved break for lunch of delicious local specialities. Then, after eating, you'll visit the remains of the Temple of Artemis, which was one of the Seven Wonders of the Ancient World, and the Isa Bey Mosque, which dates back to the 14th century.

From Isa Bey, you'll set off back to Kusadasi, where your tour will come to an end.

Entrance to all monuments visited.

US$ 65.60
Free cancellation up to 48 hours before the service starts
Book

No rating yet
Priene, Miletus and Didyma: travel through history to Classic Antiquity visiting three of Turkey's incredible ancient sites on this day trip from Kusadasi.
US$ 87.10
Book
like -15%

8.30 / 10 8 reviews
Known as the "Cotton Castles", the natural pools of Pamukkale are truly unique. Fall in love with their enchanting beauty on this tour from Kusadasi.
US$ 65.60 US$ 56
Book