Looking for a different kind of party? Hop on the chiva rumbera, Medellin's party bus. You'll tour around the city and the Comuna 13 as you get down to the music! 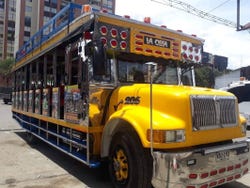 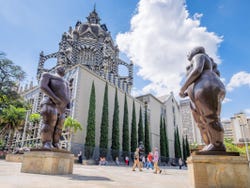 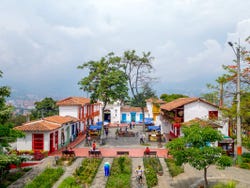 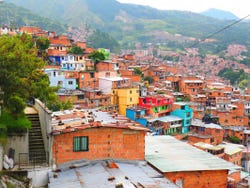 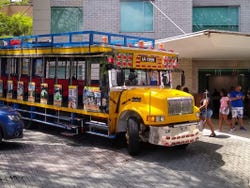 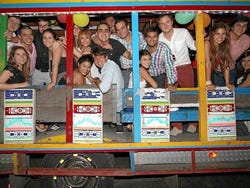 When you book, you'll be able to choose the route you want to go on:

We'll reach the Pueblito Paisa neighbourhood, a replica of a traditional Colombian village. The music will continue playing on the bus as we stroll among the colourful houses. We'll pass by Parque de los Pies Descalzos park and Plaza Botero square. Do you know what's so significant about this square?

We'll also visit Parque de los Deseos park and the Atanasio Girardot Stadium, the grounds of the famous Atlético Nacional football team! After a four-hour tour, we'll take you back to the starting point.

We'll meet at 9:40 am at the Estadio metro station or at 10:15 am at the Parque del Poblado park, depending on your choice. We'll hop on the chiva rumbera party bus and set off on our tour until we reach the Parque de los Deseos park while we jam to the music on board!

We'll go to a local restaurant to enjoy a typical lunch with soup and a drink. Back onboard the chiva rumbera, we'll head to San Javier, better known as Comuna 13. In this marginal neighbourhood, Pablo Escobar recruited most of his hitmen.

We'll find out more about this story as we walk the streets of the neighbourhood and admire the famous graffiti! After a six-hour tour, we'll take you back to the starting point.

When you book, you'll be asked to select where you'd like to be picked up from:

If you'd prefer to do the Medellin chiva rumbera tour at night, you can book the night tour.

Ride on a chiva rumbera.

You can book up until the previous day (9:40 AM local time) if there are still places available.

from
US$ 27.80
No hidden fees or surcharges
Free cancellation up to 24 hours before the service starts
Book

9.80 / 10 289 reviews
Enjoy a boat ride, climb the La Piedra del Peñol rock and discover the history of one of Pablo Escobar's mansions on this tour of Guatapé from Medellin.
US$ 37.20
Book
like

9.40 / 10 208 reviews
From beautiful colonial architecture to spectacular views from Peñón Rock: enjoy the best of Guatapé on this day trip from Medellin.
US$ 30
Book
like

10 / 10 9 reviews
With this city tour of Medellin, you'll get to see the main landmarks in this iconic Colombian city, such as Carrera Junin and Plaza Botero.
US$ 20
Book