Be captivated by the contrasts of light and sound on the Teotihuacán pyramids on this night tour where we'll discover the secrets of the City of the Gods. 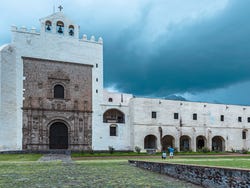 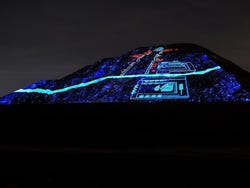 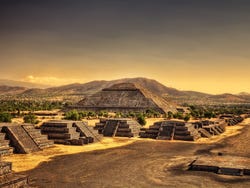 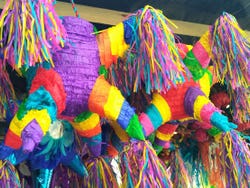 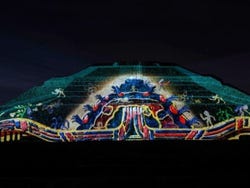 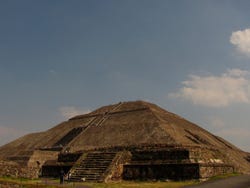 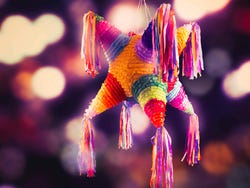 At 11 am we'll meet at Monte de Piedad Street in Mexico City and start a very special tour.

First, we'll stop in the municipality of Acolman, a village on the outskirts of the capital. There we will visit the ex-convent of San Agustín, a temple begun in the 16th century that belonged to Augustinians and Franciscans and currently houses the Viceroyalty Museum of Acolman.

Afterwards, you'll have an hour and a half of free time to enjoy a local dish. With renewed energy, we'll go to a piñata workshop, to discover why they became famous in the town. We'll also be able to decorate one with our own hands and take it home with us!

Afterwards, we'll head to the pre-Columbian site of Teotihuacán. We'll walk through the pre-Hispanic remains while they explain some curiosities about the site.

We'll ascend the staircase in front of the pyramid of the Sun to be part of an extraordinary experience of lights and sounds. You would never have imagined you would be able to witness such a magical spectacle as the one you'll enjoy in the 'City of the gods'. Open your eyes wide! This show is something you'll remember forever.

The tour will end returning to the starting point in Mexico City at 11 pm.

Light and sound show at night in Teotihuacan.

Entrance to the ex

US$ 74.60
Free cancellation up to 24 hours before the service starts
Book

9.40 / 10 269 reviews
Can you imagine flying over the Teotihucán Valley? Live through an unforgettable experience, admiring one of the most important Mesoamerican civilisations from above.
US$ 134.30
Book
like

9.30 / 10 212 reviews
On this tour we'll get up close with the most visited archaeological site in Mexico, admiring the mythical Teotihuacán pyramids.
US$ 32.90
Book
like

8.90 / 10 73 reviews
Leave the bustle of Mexico City and breathe the fresh air from the Iztaccíhuatl volcano, as you admire unbeatable views of Popocatépetl and the Mexico Valley.
US$ 47
Book