Discover the Italian city full of charm and a mix of cultures with this Palermo Free Tour. Explore the most symbolic locations and hidden corners around the Sicilian capital's historic centre.

Discover the Italian city full of charm and a mix of cultures with this Palermo Free Tour. Explore the most symbolic locations and hidden corners around the Sicilian capital's historic centre. 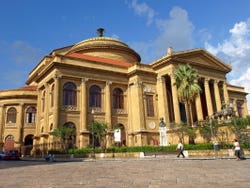 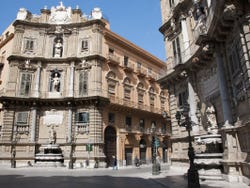 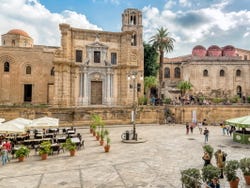 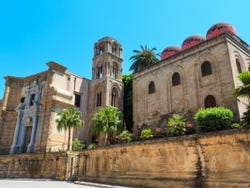 We'll meet at the Sant'Ignazio all'Olivella Church entrance, in the district of Champagneria and head towards Piazza Verdi, where the Teatro Massimo is located. We'll admire the facade of this imposing architectural complex surmounted by a hemispherical dome. Did you know that it is one of the largest theatres in Europe?

Our next stop will be the Galleria delle Vittorie, an ancient commercial area inaugurated in 1935, which hides many secrets. Nearby, we'll reach Quattro Canti, the octagonal square located at the intersection of Via Maqueda and Via Vittorio Emanuele, one of the most photographed locations in Palermo.

The route will continue towards Piazza Bellini, to see the church of Santa Maria dell'Ammiraglio, better known as La Martorana, whose current appearance is the result of the mixture of various styles covering the original Norman building. Its façade is a reflection of Palermo's eclecticism!

Following on, the guide will lead us to Corso Vittorio Emanuele, where we'll find the Cathedral of Palermo, built in 1184 on the area of a basilica transformed into a mosque by the Arabs, and then returned to Christianity by the Normans. We'll admire the magnificent Arab-Norman style temple of worship, declared a UNESCO World Heritage Site, while our guide reveals interesting information about this important monument in the Sicilian capital.

After two hours the tour will end.

Very interesting tour through beautiful Palermo with a very nice, dedicated and competend guide. Thank you very much!

9.70 / 10 14 reviews
Discover the most emblematic locations surrounding civil resistance to mafia power and rebellion against racketeering with this Palermo Anti-Mafia Tour.
US$ 32.80
Book
like

Discover Monreale and its rich Arab and Norman heritage with this private tour. Visit the cathedral and the Benedictine cloister with an exclusive guide just for you and your group.

No rating yet
Get to know the real Corleone on this excursion from Palermo. Take in stunning landscapes & discover the fascinating history of the Sicilian anti-mafia!
US$ 50.90
Book