Five days, three towns and countless fascinating places to explore: discover the jungle, history and traditions of Cambodia on this tour from Phnom Penh to Siem Reap. 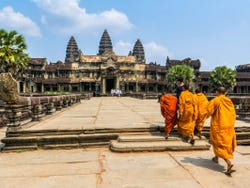 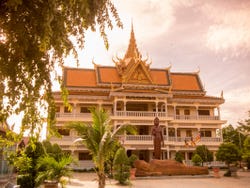 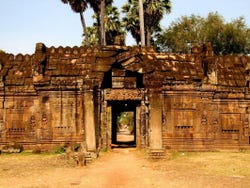 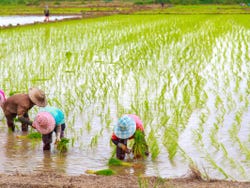 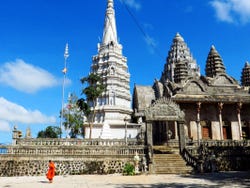 After meeting in Phnom Penh, we'll set off on an hour's drive through the Cambodian countryside to the port. There we'll board a traditional boat and set sail to Silk Island, where we'll learn how it earned its name from the locals, who will show us the process of silk production from breeding mulberry tree worms to weaving on hundred-year-old looms.

Returning to dry land, we'll make the journey to Kompong Cham. Arriving after a two hour drive, we'll enjoy a guided tour of the city before indulging in a delicious lunch of local specialities and visiting the Wat Nokor Temple. Our next stop will be at Phnom Pros Monastery, where we'll get to meet the monks who live here before heading to the nearby mountaintop pagoda of Phnom Srey.

On the way back to our hotel in Kompong Cham for the evening we'll make a final stop to visit the Keung Kok fabric factory to learn all about the traditional weaving methods.

We'll begin the second day of our tour with breakfast in our hotel in Kompong Cham, before leaving the city behind and setting off on a three hour drive through the lush landscapes of central Cambodia, characterised by their abundant rice terraces. Reaching Kompong Thom, we'll continue to discover the culture and traditions of rural Cambodia. We'll stroll through the city, discovering its architecture and the different food stalls that line its streets, before stopping in a local restaurant for a well-earned lunch.

After breakfast at the hotel, we'll take a walk through the central market in Kompong Thom, where we'll mingle with the locals as we discover the most traditional Cambodian products on offer at the stalls.

We'll then say goodbye to Kompong Thom and make the three hour journey to Siem Reap. Along the way, we'll make a stop for lunch and to explore one of the most beautiful villages in the region: Kompong Kleang, located on the shore of Tonlé Sap Lake. We'll stroll through its streets and discover the floating houses built on stilts on the water. At the end of the day, we'll arrive at the hotel in Siem Reap.

We'll fuel up with a hearty breakfast before setting off to Angkor, the ancient capital of the Khmer Empire. Exploring the archaeological park, we'll discover the ruins of the city, which flourished from the 9th to 15th centuries, hidden amongst the overgrown roots of the jungle. You'll be enchanted by this unique site, which has been used as a filming location for Tomb Raider.

Our tour of Angkor will also take us to see Ta Nei, one of the most remote temples in the park. We'll then stop for lunch before entering the Angkor Thom archaeological site. Travel back in time admiring the South Gate, the Terrace of the Elephants and the Royal Palace and admire the fusion of nature and tradition exploring the temples of Bayon, Baphuon, Preah Palilay and Phimeanakas.

For the finishing touch on an unforgettable day, we'll watch the sunset over Angkor Wat Temple - a truly magical experience. Then as evening draws in, we'll return to Siem Reap for the night.

The final day of our tour will begin bright and early, leaving Siem Reap at 4:30 am and making our way to Angkor Wat again to watch a spectacular sunrise illuminating the impressive ancient temple.

Having admired the sunrise, we'll continue our tour of the Angkor Archaeological Park, visiting Preah Khan temple to marvel at the way the tree roots have taken over its crumbling stones. After stopping for breakfast, we'll discover the temples of Neak Pean and Ta Som and further explore the emblematic Angkor Wat.

We'll have lunch in a restaurant near the temple, and you'll then have the rest of the afternoon free to explore inside Angkor Wat and admire its fascinating engravings of religious tales. At the end of the day, we'll return to Siem Reap where our tour will finish.

To enter certain religious buildings, you must ensure your shoulders and knees are covered out of respect.

Entrance fees to the different monuments and temples visited in this itinerary are not included in the price of the tour.

All tours as mentioned in itinerary.

US$ 745
No hidden fees or surcharges
Book

No rating yet
Experience traditional Cambodian folklore through music, dance and theatre watching a Plae Pakaa living arts performance in Phnom Penh.
US$ 42
Book
like

9.60 / 10 5 reviews
Phnom Penh is a city of beautiful ancient temples and palaces. Discover the Cambodian capital's incredible cultural heritage and fascinating history.
US$ 199 per group
Book
like

No rating yet
Explore Phnom Penh on this two-day tour of the Cambodian capital. Discover spectacular temples and visit museums commemorating the county's tragic story.
US$ 389 per group
Book