Do you want to explore the highest peak in Spain? Climb over 3500 metres with this Teide Day Trip + Transfer from North that includes entrance to the cable car and pick-up at different points in the north of Tenerife.

Do you want to explore the highest peak in Spain? Climb over 3500 metres with this Teide Day Trip + Transfer from North that includes entrance to the cable car and pick-up at different points in the north of Tenerife. 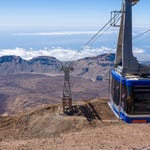 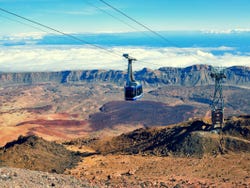 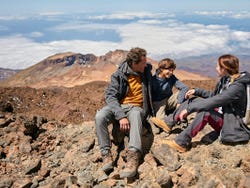 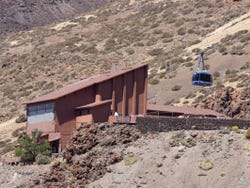 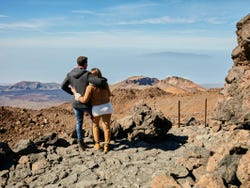 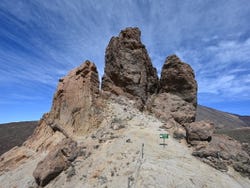 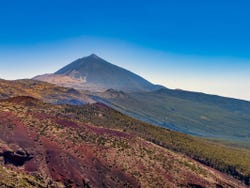 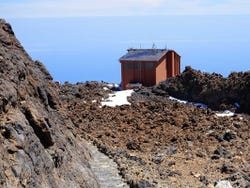 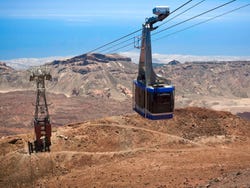 Between 11 am and 12 pm, we'll pick you up at your hotel in the north of Tenerife to go to the Teide National Park, the highest peak in Spain!

On arrival at the base of the volcano, we'll ride on the Teide cable car, 2356 metres high. We'll enjoy a quiet ride lasting around 10 minutes admiring the million-year-old volcanic lava.

When we reach the summit, at more than 3500 metres high, you'll have 1 hour of free time to explore the area at your leisure. From the La Rambleta viewpoint, you can enjoy an incredible view of the canyons and you might see some of the other islands on the horizon. During your free time, you can have lunch and carry out the trekking routes that cross the volcano.

After an hour at the top, it will be time to descend again. We'll take you by bus to the nearby Roques de Garcia which will offer us one of the most magical and popular views of Mount Teide. From the stairs that run alongside these rocky formations, we'll contemplate the Llano de Ucanca, a landscape that looks like Mars. You'll be amazed!

The activity will end leaving you at the starting point between 6 pm and 7:30 pm.

This excursion includes pick-up in various areas of Santa Úrsula, Los Realejos and Puerto de la Cruz between 6:40 and 9:25 am. When booking please indicate where you want us to pick you up. You can check the pick-up locations here: Teide cable car + transfer from North pick up.

In the area between Santa Cruz de Tenerife and Tacoronte, pick up will only take place on Wednesdays and Saturdays.

Excursion from the south of Tenerife or entrance only

If you're staying in other areas of Tenerife, you can also book the excursion to Teide Observatory Day Trip + Transfer from South. If you prefer to go to the National Park on your own we recommend booking the Mount Teide cable car tickets.

You can book up until the previous day (7:00 pm) if there are still places available. Book now to guarantee your spot.

US$ 72.90
Free cancellation up to 24 hours before the service starts
Book

Hello, we have been very comfortable and very well cared for. The driver and the guide are great professionals. Thank you very much for this experience. Opinion translated. Show original.

We were with Míriam who, although with a setback with the bus, knew how to handle it very well.Highly recommended the excursion Opinion translated. Show original.

José's explanation was very good. We could not get on the cable car because it was closed but José made us a plan by showing us the most important places in the Teide natural park, making stops at many of them. A shame not being able to go up but it was still worth the excursion Opinion translated. Show original.

The activity was very good, when we hired the activity it told us that it lasted about 8 hours, but it really was until noon, even so the guides were very attentive although it would have been good a little more time to enjoy the natural park and especially Teide . Opinion translated. Show original.

9.90 / 10 18 reviews
Fly over the highest peak in Spain and drink in the green landscapes of northern Tenerife on this unforgettable paragliding experience over Mount Teide.
US$ 173.60
Book
like

10 / 10 1 review
Enjoy the landscapes of the north of Tenerife on this horseback ride from Puerto de la Cruz, taking in the valley of La Orotava and the Teide!
US$ 69.40
Book
like

8.50 / 10 93 reviews
Discover the magical and sustainable island with this La Gomera Day Trip from Tenerife. Don't think twice and enjoy an excursion to this beautiful corner of the
US$ 96.60
Book