Visit Toledo and Segovia, two of the most popular destinations in Spain, during a full-day guided tour from Madrid and discover the “City of Three Cultures” and Segovia, home to a magnificent Roman aqueduct.

Visit Toledo and Segovia, two of the most popular destinations in Spain, during a full-day guided tour from Madrid and discover the “City of Three Cultures” and Segovia, home to a magnificent Roman aqueduct. 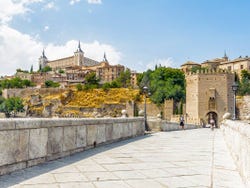 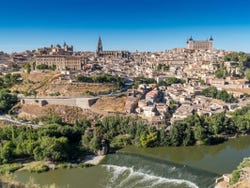 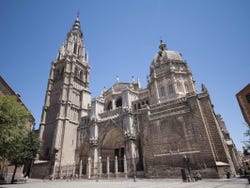 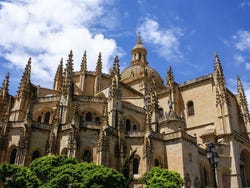 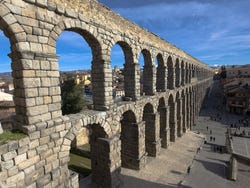 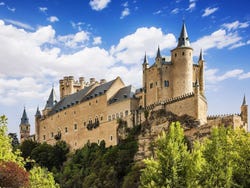 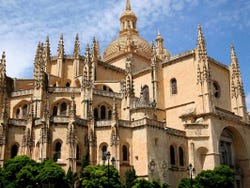 Meet your guide in front of Las Ventas metro station at 7:45am and head on a 10-hour trip to Toledo and Segovia, both declared World Heritage Sites by UNESCO.

The first stop of the journey will be Toledo, commonly known as the “City of the Three Cultures”, famous for its Moorish, Jewish and Christian landmarks when the three communities lived together for centuries.

Guided by your expert English-speaking guide, you’ll enjoy visiting its millenary architectural, artistic and urban heritage while you wander through its narrow and steep streets, gardens and squares. You’ll come to the Toledo Cathedral, one of Spain’s most prominent Gothic buildings and the Monastery of San Juan de los Reyes, where the Catholic Monarchs were buried. Before heading onto the next stop, you’ll also enjoy the most impressive panoramic views of Toledo from the Puente de San Martín (St Martin Bridge) and the Mirador del Valle (Valle Lookout).

Upon arrival in Segovia, you’ll walk to the Roman aqueduct, one of the best preserved Roman monuments in Spain. You’ll also admire the beautiful Cathedral, known as the “Dama de las Catedrales” (Lady of the Cathedrals) for its surprising Gothic and Renaissance design.

Next, you’ll follow your guide through the streets of the Canonjías neighborhood until you get to the Alcázar, one of the country’s most-visited castles. From here, you’ll be able to a see the medieval city walls that once surrounded the entire town.

The coach will drop you off in Madrid at approximately 6:45pm.

Admission to the Alcázar of Segovia.

18% discount on the official ticket price.

Lunch (but you'll have time to eat in Segovia).

Admission to the Tower of John II of Castile in the Alcázar of Segovia.

I loved our tour guide Khan! He was knowledgeable and funny. It was a great trip.

Guides were ver nice and punctual on the tour. The let you decide if you want to know the cities with them or by yourself.

English tour guide was really excellent and did her best.

8.30 / 10 163 reviews
Enjoy a morning or afternoon in Toledo, one of the best preserved medieval cities in Spain, packed with stunning landmarks and art work by El Greco.
US$ 53.50
Book
like

9.30 / 10 406 reviews
Take a free walking tour of Madrid and discover its most emblematic areas, monuments and buildings accompanied by a local bilingual guide and learn about its history and legends.
Free!
Book
like

8.90 / 10 42 reviews
Discover the secrets of the Wanda Metropolitano, the new Atletico Madrid stadium, and learn all about the club at the Territorio Atleti Museum.
US$ 26.70
Book