Pass through the Santo Domingo colonial area in this tour where you'll discover the legacy of the Columbus family and the main monuments of the oldest city in America. 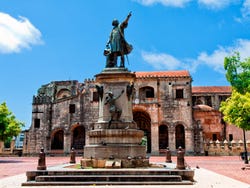 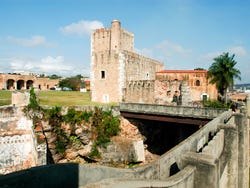 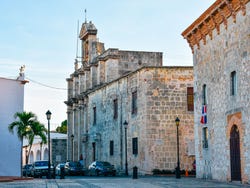 First thing in the morning we'll pass by your hotel to pick you up and leave towards the Dominican capital, arriving following a two-hour bus journey.

On our guided tour of the Santo Domingo colonial area, we'll pass through the historic centre from the 16th century, declared a World Heritage Site by UNESCO. The visit begins with the Cathedral of Santa María la Menor, the first cathedral built in the new world. Here we can see a stunning example of the "plateresque" architectural style, prevalent throughout Spain from the late 15th century onwards, and used for the first time outside Spain in this cathedral.

Next, we'll see the National Pantheon, a monument from the 18th century which houses the remains of many of the Dominican Republic's most famous and honoured citizens. Next, the tour visits Plaza de España, where the Alcázar de Colón can be found, the old residence of Christopher Columbus himself. And the Museum of Royal Houses, where we'll learn about the palaces in which the old governors stayed, but we won't visit on this tour. After having visited the museum we'll pause to enjoy a typical Dominican lunch in the centre of the city.

The excursion continues over the afternoon with a panoramic tour of the Santo Domingo new town, where we'll see some of the most important buildings in the Dominican capital, such as the Palace of Fine Arts, the National Theatre, or the Presidential Palace. The route ends on the banks of the Ozama River, with a visit to the Columbus Lighthouse, a monument dedicated to the famous explorer, where his remains are said to rest.

With the tour of Santo Domingo over, we begin our return journey to the hotels of Punta Cana, where we'll arrive late in the afternoon.

Entry to all the museums and momuments visited

If there are still places available, you can book until the previous day (local time in Punta Cana).

US$ 90
US$ 85.50
No hidden fees or surcharges
Free cancellation
Book

If you cancel after the reservation you will be refunded 100% of the total value. If you do not show up, you will not be refunded.

No rating yet
Climb on board and enjoy the heavenly beaches and incredible coastal views of the Dominican Republic on this boat cruise. Not to be missed!
US$ 59
Book
like New

6.20 / 10 9 reviews
Imagine partying inside a cave? You don't have to! With your ticket to Punta Cana's iconic nightclub Imagine, you can enjoy an unforgettable night in a cave!
US$ 30
Book
like New

8.20 / 10 39 reviews
Swim with dolphins in their natural habitat in Punta Cana and enjoy an unforgettable, unique experience for the whole family!
US$ 99
Book