Explore one of the most historic cities in Spain on our Salamanca Private Tour. You'll be accompanied by a guide just for you and your group as you stroll around this beautiful city and pass by its most iconic places, such as the oldest university in Spain.

Explore one of the most historic cities in Spain on our Salamanca Private Tour. You'll be accompanied by a guide just for you and your group as you stroll around this beautiful city and pass by its most iconic places, such as the oldest university in Spain. 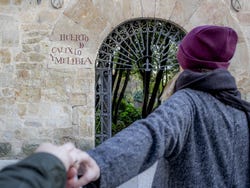 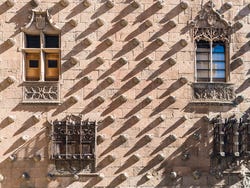 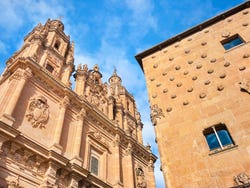 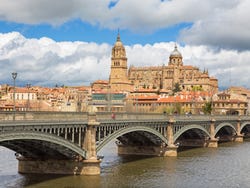 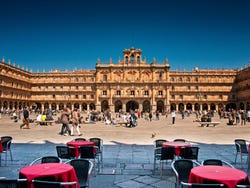 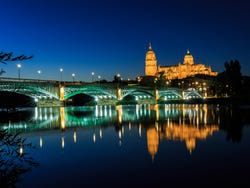 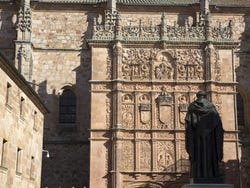 Once we've met you at your selected time, we'll start our private tour of Salamanca. When you make your booking, you'll be able to choose if you'd like to do a 2, 4 or 6-hour tour. In addition, as this is a private tour, you'll have the power to choose the places we visit.

During our tour, we can wander around Salamanca's historic Old City, which was declared a UNESCO World Heritage Site in 1988. Here, we'll find the Plaza Mayor, which is one of the most iconic places in the city.

Remember to look up! To discover the true spirit and mysteries this city conceals, you'll need to pay attention to the small details on its buildings. One of these key details would be the frog at the University of Salamanca, which was founded in 1134 and given its royal charter in 1218. This university is the oldest in Spain and the third-oldest in the western world.

Salamanca has many more historic buildings that you may want to visit, such as the magnificent Jesuit La Clerecía building and the Casa de las Conchas, which is covered with little scallops. Perhaps you'll also want to see the impressive New Cathedral of Salamanca, which was built between the 16th and 18th centuries and exhibits both Gothic and Baroque architectural styles. Joined to the New Cathedral, we'll find the Romanesque and Gothic Old Cathedral, which was founded in the 12th century.

If you're more interested in literature, just let us know! In this case, we'll take you to the Orchard of Calixto and Melibea or to the banks of the river, where we'll find the monument dedicated to Lazarillo de Tormes. This last figure is from the iconic Spanish novella about this very fictional character, which saw the birth of the picaresque literary genre.

After a fascinating private tour of Salamanca, we'll say our goodbyes at your hotel or a central location of your choice.

We can start this private tour of Salamanca from your accommodation or from a central location that'll be convenient for you.

By reserving a private tour, you'll be able to modify the route we follow. You'll explore the places you most want to visit accompanied by an exclusive guide who'll be able to share lots of history and fascinating facts with you.

Per group from
US$ 56.60
Free cancellation up to 0 days before
Book

No rating yet
Glide through the sky of Salamanca with a balloon ride, enjoying incredible views of the city in an experience that you will never forget!
US$ 192.40
Book