Explore Venice Beach, spot the stars in Beverly Hills and embrace the glamour of Hollywood: leave San Diego behind for the day and discover the magic of Los Angeles on this guided tour! 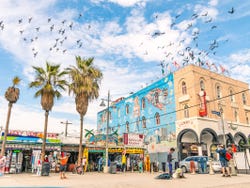 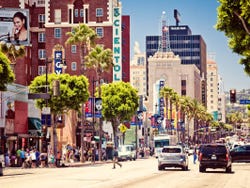 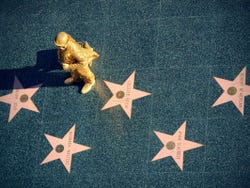 On the morning of your tour, you'll be picked up from Santa Fe Train Station and taken north up the Californian coast. We'll make our first stop in San Clemente, from where you'll arrive in Los Angeles after an hour. Ready to discover the city of stars?

Once we arrive we'll make our way to the Downtown area, discovering its most famous spots, such as Plaza Olvera - a demonstration of the city's Hispanic heritage. Then we'll continue to explore the mishmash of cultures that is Los Angeles, visiting Chinatown and then the Walt Disney concert hall, designed by the celebrated architect Frank Gehry.

We'll stop to eat at Universal Studios at around 12:30, then after eating, it'll be time for Tinseltown! See the Hollywood Bowl and the emblematic Melrose Avenue, the setting of the famous series Melrose Place, before passing by Paramount Studios, the fifth oldest surviving film studio in the world. Do you know which movies were filmed here?

No one can say they've really seen Los Angeles without a visit to Hollywood Boulevard! Stroll past the Dolby Theatre, home to the Academy Awards, and spot your favourite celebrity's name amongst the more than 2000 stars on the Hollywood Walk of Fame. What's more, you'll stop at a great viewpoint to see the iconic white letters of the Hollywood sign up on Mount Lee. Don't forget your camera!

Finally, we'll explore the most luxurious neighbourhood in the city: Beverly Hills, with its mansions, boutiques and flash restaurants. And you'll have the opportunity to explore Rodeo Drive - the biggest shopping street in the city.

our unforgettable tour of Los Angeles and Hollywood will come to an end at 4:30 pm back at the original meeting point in San Diego.

US$ 169
No hidden fees or surcharges
Book

No rating yet
The Go San Diego Pass is a tourist sightseeing pass with free access to 39 attractions, including admission to the San Diego Zoo and Belmont Park.
US$ 102
Book
like

No rating yet
Visit San Diego Zoo, one of the largest of its kind, and marvel at giraffes, rhinoceroses, elephants and many more wild animals up close.
US$ 62
Book
like

No rating yet
Drive around San Diego with this electric car tour. You'll cruise through Balboa Park and the city's most popular neighbourhoods - California dreamin'!
US$ 63.08
Book