The Hague, also known as The International City of Peace and Justice, offers both an important political setting and a culturally vibrant atmosphere. Discover the city's extensive history and varied culture with this private tour. 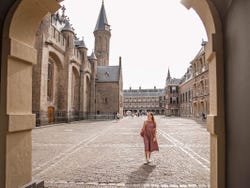 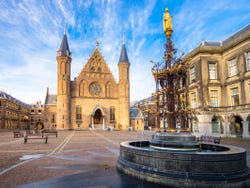 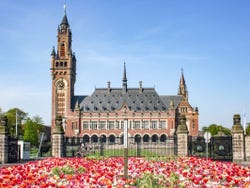 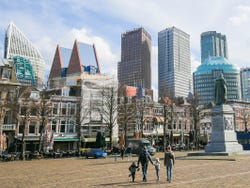 Private Tour of The Hague

The history of The Hague and its later development dates back to the Middle Ages. We'll begin the tour meeting at the chosen time at your hotel or the symbolic Binnenhof, whichever you prefer.

The Binnenhof is a complex of administrative buildings, built in the 13th Century, which are home to the national parliament headquarters (The States-General of the Netherlands), the Ministry of General Affairs and the Prime Minister's Office.

The Ridderzaal, also known as The Hall of the Knights, is another important feature of the complex, used for official receptions and conferences. Did you know that it is also home to the annual celebration of Prinsjesdag? The important political event is held on the third Tuesday in September, and the reigning monarch reads their speech outlining the government policy for the year.

We'll continue the private tour around The Hague arriving at the majestic Noordeinde Palace. It is one of the Dutch Royal Family's four official residences, and it's currently used as the monarch's official workplace. However, the building hasn't always been completely intact, in 1948 the central section was destroyed in a fire.

The next stop is another important monument in The Hague, the renowned Peace Palace (Vredespaleis). The building was originally an idea conceived by a Russian diplomat and American diplomat in 1900 for the Permanent Court of Arbitration, but it is now a symbol of peace housing the International Court of Justice including its impressive Library of International Law.

We'll finish the tour heading back to the meeting point or you can choose a central point in the city which you'd like to visit.

When booking a private tour you'll have an English speaking guide to accompany just you and your partner, family or friends. You'll save money if it's a big group.

You can choose whether we start the private walking tour of The Hague from your hotel (as long as it's central) or from the Binnenhof main entrance, under the equestrian statue of William II.

English speaking guide specialised in the history of The Hague.

We'll start at your hotel or at the Binnenhof.

Private and exclusive tour, there won't be anyone else other than your partner, family or friends with you.

Entry to museums or monuments you'd like to visit.

Transport to the meeting point.

Per group from
US$ 188.30
Free cancellation up to 24 hours before the service starts
Book

Rob has been an amazing guide, he showed us many interesting places and provided us with useful information, tips and funny anecdotes. I really recommend this tour!

10 / 10 3 reviews
Incredible model replicas of airports, cities and historic buildings await you in the miniature city of Madurodam - a fascinating park in The Hague.
US$ 20.50
Book
like

No rating yet
Let the vibrant colours and intoxicating aromas of the tulips of Keukenhof seduce you on this tour from the Hague to one of the world's largest flower gardens.
US$ 116.50
Book