Discover the fascinating Train Cemetery, beautiful salt flats, the Cañapa Lagoon and the Dali Desert on this 3-day tour of the Salar de Uyuni and its surrounding area. 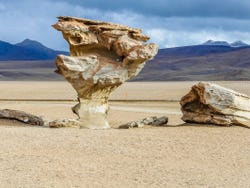 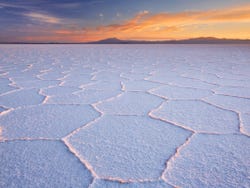 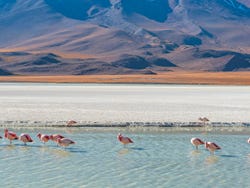 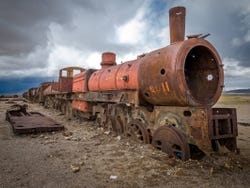 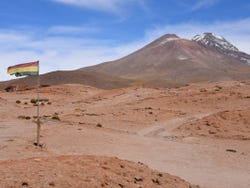 After picking you up from the meeting point on Colon Avenue in Uyuni, our 3-day tour of the Salar de Uyuni and its surrounding area will begin. The first stop on our tour will be the intriguing Train Cemetery, home to abandoned trains and locomotives from the late 19th and early 20th century.

Later, we will go to the small indigenous community of Colchani, where we'll learn how iodized salt is made and processed using traditional methods.

We'll then make our way to the magnificent Salar de Uyuni, the largest salt flat in the world. Exploring every corner of this expanse of white desert, we'll discover its most important parts, such as the Salt Piles, and the world's very first salt hotel.

Following our tour of the salt flats, we'll stop for a delicious lunch of Bolivian specialities surrounded by these unique landscapes. After eating, we'll have time to capture the magnificent scenery and its reflections on camera.

In the afternoon, we'll take a short trek around Incahuasi Island, which lies on the salt flat. On this rocky outcrop, we will see huge cacti, some reaching 30 feet in height. As the day draws to a close, we'll watch a spectacular sunset over the Salar de Uyuni, an image you'll never forget!

In the evening, we'll go for dinner in Candelaria or San Juan, where we'll spend the first night and prepare for the next day.

On the second day, we'll get up early for breakfast before setting off for a tour of the Eduardo Abaroa National Reserve. You'll be enchanted by its numerous lagoons and deserts!

We will then arrive at the small town of San Juan, famous for having the best panoramic views of the Ollagüe Volcano, which is still active. After a delicious lunch, we will visit the lakes of Cañapa, Charchota, Honda and Hedionda to see their special inhabitants: the pink flamingos.

Later we'll pass through the Siloli Desert, where we will admire some strange natural monuments, such as the Stone Tree, which have formed over centuries of wind erosion. The last stop of our day will be at the Colorada Lagoon, known for its striking red waters.

After an adventure-packed day, we will head to our accommodation in Huayllajara and enjoy dinner and a well-earned rest.

We will have breakfast and set off to see the geysers located nearby - the columns of hot water and steam shooting out of the ground are truly impressive! We'll then travel to the impressive Salvador Dali Desert. It is named after the famous Spanish painter, because of the tonal similarity to the artist's paintings.

From there, we will make our way to the saltwater lagoons of Laguna Verde and Laguna Blanca to admire their fascinating coloured waters. We'll then head to the Valle de Rocas, a valley characterised by its intriguing natural rock formations, before stopping in San Cristóbal, a small town home to one of the oldest churches in Bolivia and the country's biggest gold mine.

Our fantastic 3-day tour of the Salar de Uyuni will come to an end back at your hotel in Uyuni, arriving at around 5:30 pm.

This three-day tour includes two nights' full-board accommodation in shared rooms. The first night we will stay in Candelaria or San Juan and the second night in Huayllajara.

All the meals during the tour (3 lunches, 2 dinners, and 2 breakfasts).

Entry to Isla Incahuasi: US$ 1.

Entry to the Eduardo Abaroa Reserve: US$ 22.

You can book up until 4 hours before the activity as long as there are still places. Book now to guarantee your spot.

These are genuine reviews written by our customers.
8/ 10
8 1 review

9.30 / 10 3 reviews
Discover the magic of Bolivia's landscapes and explore the world's biggest salt flat on this two-day tour of the Salar de Uyuni and Tunupa Volcano.
US$ 780 per group
Book
like New

New
Travel to the past with this trip to Pulacayo where you will visit the historic train museum and the most important silver mines in Bolivia.
US$ 36
Book
like New

New
Enjoy a dinner of traditional dishes under the stars in one of the most splendid enclaves of Bolivia: the Salar de Uyuni.
US$ 70
Book