Tour the capital of Poland in a Polish-made retro Fiat and admire the city as you learn about its tragic history. This tour is private just for you, your family and friends. 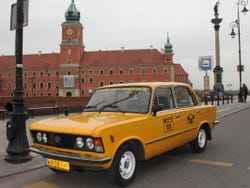 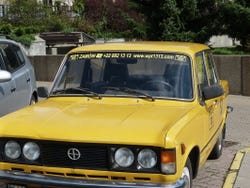 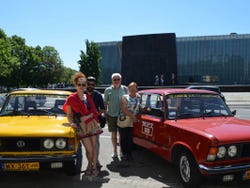 Your English-speaking guide will collect you from your hotel at the arranged time. Get in a vintage Fiat 125p, one of the country’s most representative communist cars, and explore the city in style.

As your guide drives the car, delve into the history and culture of Warsaw. Marvel at its restored buildings, since 85% of the city was demolished during World War II, and its most symbolic landmarks.

Choose one of the following options:

Head to the Old Town on a 4-hour tour and visit the most emblematic sights of Warsaw and learn about the capital’s eventful history while you sit back in the vintage vehicle. Travel to Castle Square, Warsaw Ghetto and the Praga Quarter.

While you cruise along, your guide will reveal the recent history of Poland. From the car, detect the Soviet brutalist buildings as you sip on a beer or shot of vodka. Then, make your way to a Milk Bar and try its local food (not included in tour price).

On this 4-hour tour, discover the imprints left by the Jewish community before and after World War II. Drive to the area where the Warsaw Ghetto was established during the Nazi occupation. During the war, up to 450,000 people were imprisoned in the ghetto, making it the largest in Europe.

Head to the ghetto’s still standing wall and admire the Nożyk Synagogue, then travel to the city’s Jewish Cemetery, with over 200 gravestones. While you drive along, you’ll enjoy a small beer or a shot of vodka.

On this 3-hour tour delve into Warsaw’s vibrant nightlife, famous for its beer and vodka. Your iconic Fiat 125p will take you to the city’s most authentic neighborhoods, including Praga and Powiśle. The best way to explore these areas at nighttime!

Try a digestive from the area, sample various appetizers in the vehicle and taste several types of Polish vodka. Stop briefly in front of the Palace of Culture and Science. Then, continue to the city center to discover its acclaimed vodka culture.

Beer or a shot of Vodka.

Photography of the tour.

You can book up to 5 days before (Warsaw local time) if there are still places available.

Per group from
US$ 137.60
No hidden fees or surcharges
Free cancellation up to 7 days before
Book

Pavel is a knowledgeable guide with excellent driving skills who was ready to answer all our queries with a smiling face. His enthusiasm is infectious and it is evident that he loves his city passionately. Strongly recommend tours with him.

7.60 / 10 35 reviews
Our free walking tour of Warsaw is the ideal way to begin to discover the capital of Poland, exploring the Royal Castle, Barbican and the Market Square.
Free!
Book
like

7.70 / 10 6 reviews
Experience the legendary nightlife of the Polish capital and spend an unforgettable night exploring the city's best bars on this Pub Crawl of Warsaw.
US$ 17.70
Book
like

7.60 / 10 31 reviews
Explore the capital of Poland in a comfortable and practical way by hopping on and off our sightseeing buses from any of the numerous stops.
US$ 20.90
Book