Discover everything that Barcelona has to offer with this tour of the city. You'll wander through its streets, admire the impressive aerial views from the sky and feel the tranquillity of the sea.

Discover everything that Barcelona has to offer with this tour of the city. You'll wander through its streets, admire the impressive aerial views from the sky and feel the tranquillity of the sea. 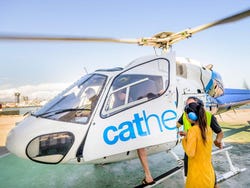 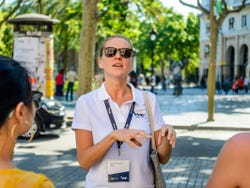 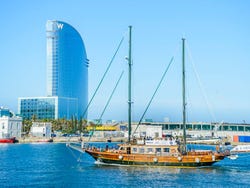 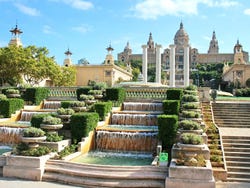 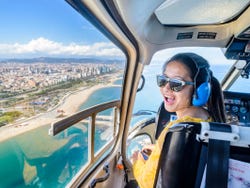 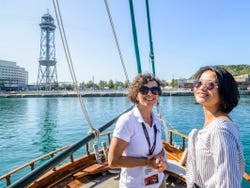 At the selected time, we'll begin our tour from the meeting point at Passatge de la Concepció, 7., in the heart of Barcelona's Gothic Quarter, right next to Plaça Sant Felip Neri. We'll embark on our hour and a half walking tour through the historic centre in the direction of the statue of Columbus, or the Colón Monument.

Strolling through the Gothic Quarter, and visit the Sant Felip Neri Church and the Plaça Sant Jaime. Next, we'll pass by the Government buildings and the Generalitat de Cataluña headquarters as well as admiring the Santa María del Pi Basilica.

Following on, you'll be guided through the iconic Ramblas, where we'll stop to roam through the Boquería Market and the Plaza del Rey, before heading to the Port Vell marina. Our walking tour will end at the Colón Monument, and we'll then head to the heliport. Here you'll revel in the unforgettable experience of flying over the Mediterranean in a helicopter while pointing out Barcelona's famous landmarks.

After the six minute helicopter flight, you'll return to the Columbus Monument, where we'll make our way to a pier next to it. There, we'll board a wooden Turkish schooner for an ecological catamaran for a 40 minute boat cruise along the coast of Barcelona. The perfect ending to a full day experiencing the city by land, sea and air!

Who can participate in this activity?

Boat tour from the port.

US$ 136.10
Free cancellation up to 24 hours before the service starts
Book

We live in Barcelona and we have always done Civitatis Free Tours in all the cities where we travel and we wanted to know what is explained about our city. Our guide today, Marco, has been excellent. Very good explanations, curiosities and very kind and attentive with the whole group (10 pax). What I found a bit expensive is the price of the activity, because even though it includes the “icing on the cake” which is the helicopter, a lot of time is wasted in organizing the flight groups to fly only 7 minutes . Opinion translated. Show original.

Adriano a great guide and very kind and friendly, we loved it, to repeat Opinion translated. Show original.

The guide Adriano was excellent, the whole tour was perfect, a professional, friendly, personalized atmosphere, etc. I will repeat it with my family. Opinion translated. Show original.

10 / 10 2 reviews
Travel back to the 9th century and delve into the Roman vestiges of Cardona Castle, a medieval jewel very close to Barcelona.
US$ 107.70
Book
like

7.80 / 10 50 reviews
Embark on a guided tour of Girona, discovering its most emblematic landmarks and exploring filming locations from Game of Thrones.
US$ 62.30
Book