During this plane ride from Cannes, you'll fly over the most beautiful spots in the French Riviera, such as the bay of Saint-Tropez or the Lerins Islands. It'll be an experience you won't forget. 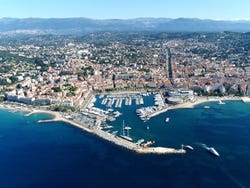 We'll start our flying adventure at the Cannes-Mandelieu Airport. At the agreed time, we'll board the plane and take off. Ready to admire the French Riviera from the skies?

First, we'll head South to glide along the famous Saint-Tropez Bay, one of the most iconic spots in the French Riviera. From the aircraft, we'll be able to see the luxurious yachts sailing in this exclusive area in the Mediterranean.

Then, we'll leave the coast behind to fly over the Esterel massif: a volcanic mountain that towers imposingly over the green landscapes in the area.

We'll head now to the Lerins Islands, a small archipelago located in front of the port of Cannes. To protect the docks of the city, several fortresses were built on these islands, which you'll be able to see from within the plane.

After an hour's flight, we'll land in the same airport from which we departed.

The flight will take place in a Socata TB10 aircraft or similar, that has the capacity to carry a maximum of 3 people plus the pilot.

The plane will take off from Cannes-Mandelieu Airport. However, the meetup point for departure might change due to various circumstances, in which case you will be given enough notice in advance.

The activity takes place with a pilot that speaks in english.

Per group from
US$ 331.20
Free cancellation up to 48 hours before the service starts
Book

10 / 10 3 reviews
Head to Monaco and discover the luxury and beauty of the tiny principality. And you'll get to know Eze and La Turbie on the way, two little towns with unique charm.
US$ 73.60
Book
like

10 / 10 1 review
Prepare your senses for this excursion to Grasse, with a long tradition of perfume making and the medieval charm of the interior of the French Riviera.
US$ 148.30
Book
like

No rating yet
Explore the French Riviera with this visit to Cannes, Antibes and Saint Paul de Vence. Three delightful little towns.
US$ 70
Book