Intrigued by Christopher Columbus' travels to the Americas? Discover the secrets of his expedition exploring historical sites in Huelva on this guided trail. 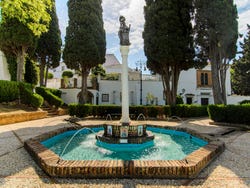 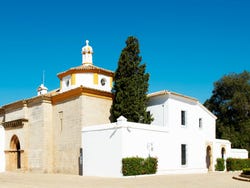 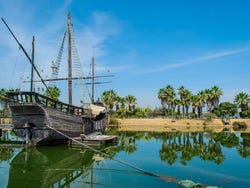 Leaving El Rompido behind on the day of your tour, you'll head in the direction of Palos de la Frontera, the historic town where your Christopher Columbus Trail will begin. During the journey, your guide will keep you entertained with explanations of the most important places of interest in Palos.

Arriving in Palos de la Frontera, you'll start following in the footsteps of Columbus, whose legacy can be found all over the historic fishing town, as it was from here that he set sail on his journey to the Americas. You'll visit the Friary of La Rábida, where Columbus stayed after his first expedition proposal was rejected.

You'll then visit the Wharf of the Caravels, a recreation of the old Huelva port which saw the departure of Columbus' ships. Marvel at the life-size replicas of the three iconic caravels that embarked on the expedition: the Pinta, the Niña and the Santa María.

Immerse yourself in the history of the explorers' arrival in the Americas visiting the Island of the Encounter, a representation of the indigenous cultures that Columbus and his fellow sailors met when they landed.

At the end of a fascinating tour, you'll return to El Rompido.

When making your reservation, you'll be asked to select your preferred pick up point from the following hotels in El Rompido:

9.80 / 10 37 reviews
Admire the magnificent marshlands of El Rompido from the comfort of a segway and have fun as you enjoy these spectacular landscapes.
US$ 33.40
Book
like

9 / 10 2 reviews
Seville is one of the jewels in Spain's crown: let yourself be captivated by charms of the Andalusian capital on this guided day trip from El Rompido!
US$ 73.90
Book
like

Wharf of the Caravels Boat Cruise

9.30 / 10 3 reviews
Discover the beautiful Huelva estuary on board a boat and find out more about Columbus' first voyage to the Americas.
US$ 47.70
Book