Enjoy a day full of nature and culture with this excursion to Mount Etna and Taormina. Don't miss this opportunity to visit the highest active volcano in Europe!

Enjoy a day full of nature and culture with this excursion to Mount Etna and Taormina. Don't miss this opportunity to visit the highest active volcano in Europe! 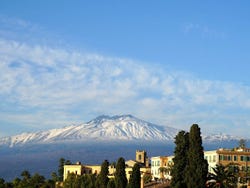 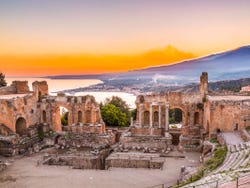 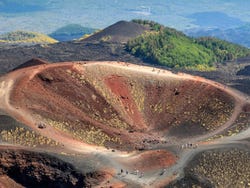 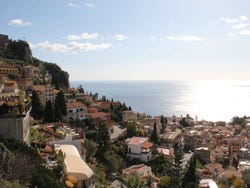 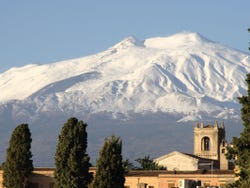 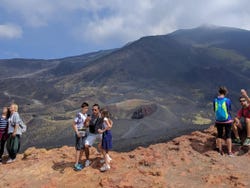 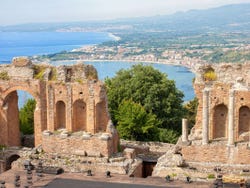 At the time of your choice, we'll meet at the port of Giardini Naxos. From there, we'll take a bus directly to Mount Etna, just over an hour away. There, we'll discover all the secrets of the highest active volcano in Europe, standing at 3300 meters high - an incredible sight!

Our first stop will be at the Sapienza Refuge, where we'll learn about the last eruptions of the Etna volcano. You'll also have the opportunity to take a tour of the craters created by the explosion of 1892, one of the most powerful events.

Later, we'll head to the city of Taormina. This Sicilian town is known for its Roman remains in an impressive theater overlooking Mount Etna. During the guided tour, you'll see the town's principal churches and monuments while learning more about its history. It won't come as a surprise that this Sicilian village has been nicknamed the 'Pearl of the Mediterranean!'

After the tour of the historic center, we'll leave you free time to stop for a drink or continue exploring Taormina at your leisure.

At the end of the tour, we'll return to the bus to go back to the starting point in Giardini Naxos, arriving about seven hours after the start of the excursion.

Are you arriving in Giardini Naxos by cruise ship?

If you are arriving at the port of Giardini Naxos by cruise ship, you will need to indicate the name of the ship when booking. We will be waiting for you at the disembarkation area half an hour after the ship's scheduled arrival time.

The capacity of all means of transport will be reduced to 20% of their maximum capacity.

At monuments, museums and attractions, the maximum permitted capacity will be a 20% of the total maximum capacity.

US$ 95.20
Free cancellation up to 48 hours before the service starts
Book

Free! Free cancellation up to 48 hours before the activity starts. If you cancel under this time, you will be refunded 70%. If you do not show up, you will not be refunded.

Explore the ancient town of Taormina and visit a winery at the foot of Etna, the highest active volcano in Europe, on this complete tour from Giardini Naxos.

Step into scenes from one of the most acclaimed films in history on The Godfather Tour from Giardini Naxos. Discover the secrets of the Sicilian Mafia in Savoca and Forza d'Agro!

10 / 10 1 review
Bella Island, the crystal clear waters of Sicily... Discover the charm of Naxos Bay with this Taormina Boat Cruise. Enjoy the beautiful views along the coast.
US$ 41.40
Book