Discover two of Portugal's most picturesque cities with this trip to Aveiro and Coimbra from Guimaraes. We'll go on a boat trip along the canals of Aveiro and visit the University of Coimbra.

Check out all the activities in Guimarães

Discover two of Portugal's most picturesque cities with this trip to Aveiro and Coimbra from Guimaraes. We'll go on a boat trip along the canals of Aveiro and visit the University of Coimbra. 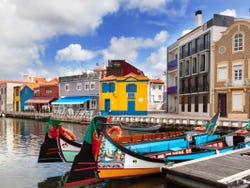 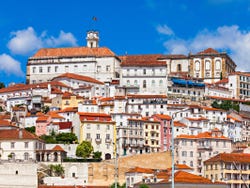 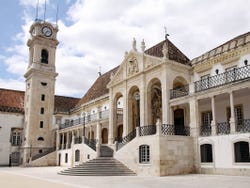 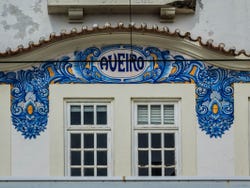 We'll pick you up from your hotel in Guimaraes and set off on our trip to Aveiro and Coimbra.

We'll start in Coimbra, which was the first capital city of Portugal and the main university city in the country. Our first stop will be, of course, the University of Coimbra. Accompanied by our guide, we'll visit the main parts of this incredible institution that boasts of over seven centuries of history. We'll also learn more about praxe, the university tradition born in Coimbra that means freshers should wear black suits and capes.

Afterwards, we'll explore the historic centre of Coimbra, whose Islamic origins can be seen in its winding, narrow streets. After passing by the Old Cathedral of Coimbra, we'll reach the heart of the city, where we'll be surrounded by shopping streets and picturesque restaurants. We'll stop here to enjoy the best dishes of Portuguese gastronomy.

After lunch we'll visit Aveiro, popularly known as Portuguese Venice because of its narrow canals and its typical boats that are similar to gondolas: the moliceiros. These boats get their name from the fact they were traditionally used to collect and transport the moliço, a kind of seaweed that was later used as fertilizer. They are long and shallow boats, which allow them to move quickly through the canals.

We'll go on an hour's boat ride along the canals of Aveiro and discover the most important points of the city from a different perspective: the fishermen's quarter, the Art Nouveau buildings on the banks of the canals...

At the end of the trip, we'll hop on board the minibus to return to Guimarães.

View complete description
US$ 111.30
Free cancellation up to 24 hours before the service starts
Book

Check out all the activities in Guimarães

10 / 10 3 reviews
Discover the principal streets, monuments and history of Guimarães on this free tour. Find out why the city is considered the birthplace of Portugal!
Free!
Book
like

No rating yet
Discover Portugal with this Guimarães Private Day Trip. Porto, the Douro region, local wineries or the Peneda-Gerês National Park, enjoy the northern landscape!
US$ 293.10 per group
Book
like

No rating yet
Discover monuments such as Guimarães Castle, Praça de São Tiago square, and the Palace of the Dukes of Braganza on our fantastic bus tour of Guimarães.
US$ 14.10
Book