Street artists, the characteristic blue tiles, the Douro river, Port wine... These are just some of the ingredients that make up this trip to Porto- an essential part of your visit to Portugal. 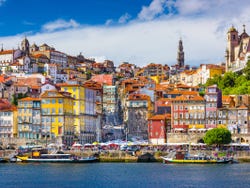 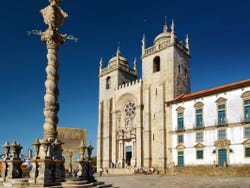 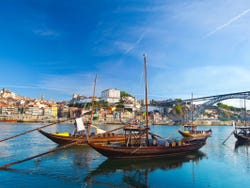 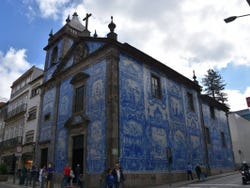 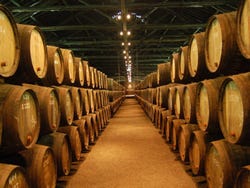 We'll pick you up from your hotel in Guimarães in the morning and set off for Porto in a minibus.

After just under an hour, the second-largest city in Portugal will appear on the horizon. We'll delve into the history and beauty of Porto as we walk through the historic centre accompanied by our guide, until we reach the magnificent Sao Bento Station. Inside, we'll marvel at its 20000 bright blue tiles that tell the story of Portugal's fascinating history. With the help of our guide, we'll try to decipher the meanings of the images on the tiles and learn more about the country's origins.

Later, we'll head to the upper part of the city, where the spectacular Porto Cathedral awaits us. We'll head inside this magnificent place of worship that was built in the 12th century, before exploring the winding medieval streets that surround the Cathedral until we reach the Rua das Flores. This street, overflowing with flowers and street artists, will lead us to the Clérigos Church, after passing by the Town Hall and the monumental Avenida de los Aliados. Once at the church, we'll begin to explore the liveliest district of the city and stop for lunch in a local restaurant.

In the afternoon, we'll stroll through the Boavista neighbourhood on the way to the Douro riverbank. We'll cross the river to the neighbouring town of Vila Nova de Gaia, home to a number of vineyards producing the famous Port wine. We'll visit one of them to learn about how this wine is made and enjoy an exquisite wine tasting.

Afterwards, we'll head back to the Douro River to set off on an hour-long boat ride past the six bridges of Porto, marvelling at the iconic Puente de Luis I, built in the 19th century to join Porto and Vila Nova de Gaia.

After admiring Porto from the river, we'll hop back on the minibus to enjoy panoramic views of the city as we make our way back to Guimarães.

Guided tour of the Porto Cathedral and the Sao Bento train station.

Visit to a wine cellar and wine tasting.

New
Discover the principal streets, monuments and history of Guimarães on this free tour. Find out why the city is considered the birthplace of Portugal!
Free!
Book
like

No rating yet
Explore the Minho region with this tour of Guimarães and Braga. The Bom Jesus do Monte Sanctuary, Braga Cathedral, the Castle of Guimarães... Discover them all!
US$ 108.90
Book
like

No rating yet
Discover Portugal with this Guimarães Private Day Trip. Porto, the Douro region, local wineries or the Peneda-Gerês National Park, enjoy the northern landscape!
US$ 302.70 per group
Book