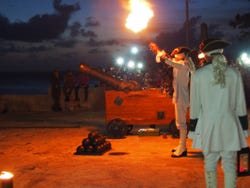 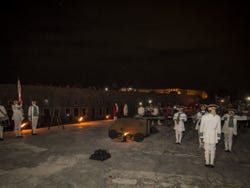 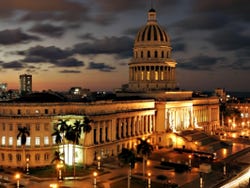 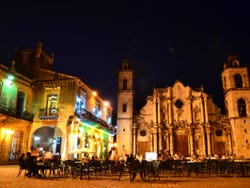 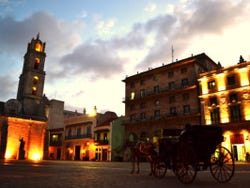 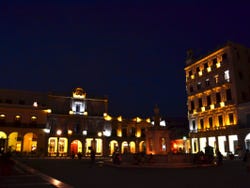 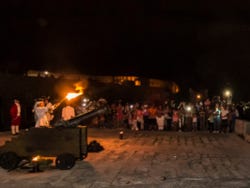 On the evening of your activity, we'll pick you up from your hotel at 6 pm and make our way to Old Havana, the Cuban capital's historic centre, where we'll enjoy a walking tour of this picturesque neighbourhood, a UNESCO World Heritage Site. We'll then head to the San Carlos de la Cabaña Fortress, known locally as La Cabaña, where the famous cannon firing ceremony takes place.

The cannon blasting ceremony is a Havana tradition that dates back to the colonial era. For centuries, every evening at 9 pm, a cannon has been fired to inform Havana's residents of the nightly closure of the gates in the city wall.

This ritual dates back to 1774, when the city had to defend itself from regular pirate attacks. To announce the closing of the city gates, the cannon was originally fired from a ship in the harbour, before the ceremony later moved to the impressive Morro Cabaña Castle which still stands guard over the bay.

While pirate attacks are no longer a daily threat to the Cuban capital, the cannon blasting ceremony has remained a tradition and has become a typical ritual in the Havana's day to day life, with guards dressing in historic uniforms as if it were the 18th century.

At the end of the ceremony, we'll enjoy a delicious dinner in a local restaurant. The menu will include a starter, a main course, a dessert and a drink to choose between juice, soda or beer.

After dinner, you'll be dropped back off at your hotel in Havana, arriving back at around midnight after an unforgettable evening.

This activity includes a pick up service from hotels located in central Havana. If you're staying in a casa particular (homestay) or alternative accommodation, you'll be informed of the address of the nearest hotel from which we'll pick you up.

Hotel pick up and drop off by air conditioned vehicle.

A faire Translate this opinion into English.

To do Opinion translated. Show original.

Very good and our guide too Opinion translated. Show original.

The service and friendliness of the service providers is very good. They came looking for us on the day and time indicated. Opinion translated. Show original.

No rating yet
Experience the glamour and rhythm of the Cuban night with this Cabaret Tropicana Entrance Ticket. Enjoy an incredible evening under the stars of Old Havana!
US$ 59
Book
like

8.80 / 10 249 reviews
Wander through the jungle and navigate through a thousand-year-old cave with this Viñales Valley Day Trip. You'll also discover the tobacco fields in Cuba.
US$ 63.80
Book
like

10 / 10 3 reviews
Explore the incredible city of Havana in style, touring the beautiful streets of the Cuban capital in a classic vintage American car.
US$ 74.60 per group
Book