Delve into the history of the Cuban capital on this free walking tour of Havana. Discover the city's beautiful colonial architecture with an expert guide. 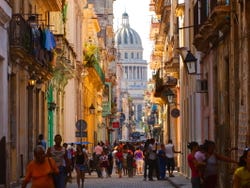 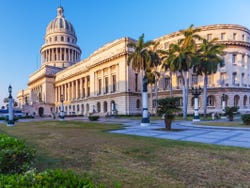 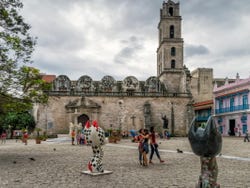 Having met up at 10:45 am at the Fuente de la India in front of the Saratoga Hotel, we'll begin our free walking tour of Havana's colonial architecture. Our first stop will be the famous Hotel Inglaterra, the oldest hotel in Cuba and a magnificent example of the city's late 19th century neoclassical architectural style.

From there, we'll head to the Gran Teatro de La Habana theatre and the most important building in the city, the Capitol, seat of the national assembly. We'll then continue to the Ursuline Palace, a Mudejar-style building that was home to one of the largest brothels in the city until the 1959 Revolution!

Our free walking tour will then take us down Calle Obispo, where we'll enter the old Johnson & Johnson Pharmacy to admire its striking historic decor, before stopping in Plaza de la Catedral to appreciate the baroque façade and towers of Havana Cathedral. This square is also home to a large number of elegant houses that belonged to colonial era landowners.

We'll next discover more of Havana's many pretty squares. In Plaza de San Francisco we'll get to see the church of the same name and the majestic Lonja del Comercio, the former stock exchange that dates back to 1909. After taking in the historic architecture of Plaza Vieja, we'll make our way to the Plaza de Armas, home to the Palace of the Captains General and El Templete, the monument to the founding of Havana 500 years ago.

After admiring the view of the La Cabaña and Morro Castle, a hilltop fortress built in the 16th century to guard the entrance to Havana Bay from pirates, our free walking tour will come to an end at 1:45 pm.

If there are still places available, you can book until the previous day (local time in Havana).

When the minimum number of participants (2) is not reached, we will contact you to offer you other alternatives.

9.60 / 10 977 reviews
Delve into Havana’s unique rich culture and history on a free walking tour accompanied by a professional English-speaking guide and learn about the city’s main sights.
Free!
Book
like

No rating yet
Discover a natural oasis in the heart of Havana! You'll be picked up by classic car to explore the tropical forest known as Almendares Park.
US$ 49.10
Book
like

8.70 / 10 6 reviews
See a new side of the Cuban capital discovering its vibrant urban art and important Afro-Cuban heritage on this classic car tour of Havana culture.
US$ 41.80
Book