Do you know about the Yoruba religion and santería? Delve into the deepest secrets of this religion with this tour of Havana.

Do you know about the Yoruba religion and santería? Delve into the deepest secrets of this religion with this tour of Havana. 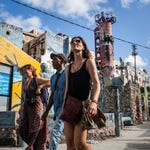 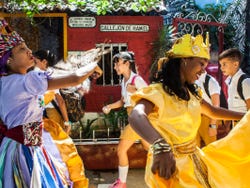 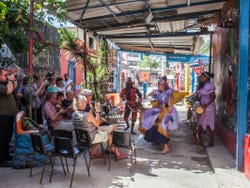 We'll meet at 10 am in the Central Park to begin the tour that will tell us all we need to know about the Yoruba religion. From there we'll walk down to the Orishas Museum.

We'll pass the famous Capitolio building, one of Havana's most unmistakeable landmarks, before heading into the museum's exhibition hall to discover the deepest secrets of the Yoruba religion. This religion came about in West Africa and reached the Caribbean country during the colonial era. Have you ever heard of santería (Spanish for "worship of saints")?.

Then we'll take the short drive to the Callejón de Hamel, the city's epicentre of Afro-Cuban culture. There we'll be able to listen to some traditional music and admire the colourful murals that decorate its walls. You'll even have some free time to explore for yourselves!

Afterwards we'll continue the tour, taking you to one of the most interesting places in Havana: the house of a babalawo (Yoruba high priest). Here, you can learn about the Yoruba religion's different rituals and even ask them questions about the future - but would you dare to?!

We'll end the guided tour at the meeting point at around 2 pm.

US$ 63.60
Free cancellation up to 48 hours before the service starts
Book

Another way to get to know the city and another culture. The dances failed but the visit to Babalao was very edifying. Opinion translated. Show original.

9.40 / 10 302 reviews
Delve into the history of the Cuban capital on this free walking tour of Havana. Discover the city's beautiful colonial architecture with an expert guide.
Free!
Book
like

8.80 / 10 247 reviews
Wander through the jungle and navigate through a thousand-year-old cave with this Viñales Valley Day Trip. You'll also discover the tobacco fields in Cuba.
US$ 65.30
Book
like

Leave the capital behind and discover two of the most charming cities in Cuba with this two-day tour of Trinidad and Cienfuegos from Havana.