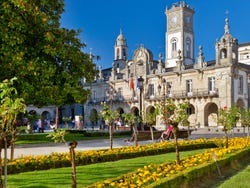 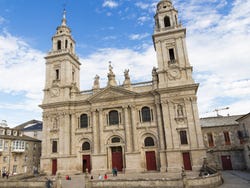 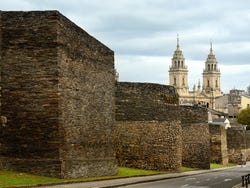 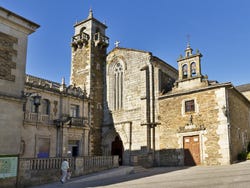 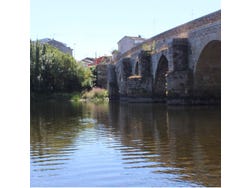 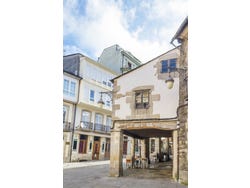 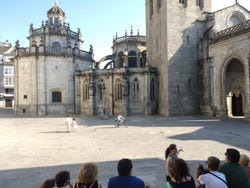 On the day of your tour, meet your guide by the giant chess board located in Praza Maior, Lugo's main city square and the location of the Concello, the town hall.

From here, you'll set off on your guided tour towards Saint Mary's Cathedral, an impressive religious building dating back to the 12th century. Inside this beautiful church, which is an important stop on the Camino Primitivo pilgrimage route to Santiago de Compostela, you'll be able to admire the different artistic and architectural styles representing its long history: from Romanesque to Gothic to Baroque to Neoclassical. Visit the chapels dedicated to San Froilán and the Virgin with Big Eyes, the patron saints of Lugo.

Just a few steps from the cathedral, you'll next reach Lugo's Roman walls. This is the only city in the world to still be completely surrounded by intact Roman walls, and you'll have the opportunity to walk alongside the ancient defences while learning all about the history of Lucus Augusti, the ancient settlement that became modern Lugo. You'll be left speechless by the excellent preservation of these 3rd century stone walls, which have been designated a UNESCO World Heritage Site.

Continue your tour to the Museo Provincial, Lugo's city museum. This extensive collection of archaeological artefacts, religious objects and local artwork are housed in a Gothic-style building that was formerly a convent and church dedicated to Saint Francis. Having discovered local history and culture through these exhibitions, you'll then wander over to the House of Mosaics. This archaeological site is home to the remains of a domus, or the villa of a noble Roman family. Inside, you'll have the opportunity to see the magnificent mosaics and get a feel for how the wealthiest and most powerful people lived during Antiquity.

We'll continue our tour of Lugo at the Domus Do Mitreo Museum, built on the archaeological remains of an ancient Roman temple dedicated to this unknown god. This innovative museum managed by the University of Santiago de Compostela is the perfect opportunity to delve into Lugo's Roman past beyond its famous walls.

The final stop on your guided city tour will be at Lugo's old prison, now a cultural centre. This building is located just five minutes from Praza Maior, where your tour will then come to an end.

The Domus Do Mitreo Museum in Lugo is closed every Monday and on some national holidays. If this is the case on the day of your tour of Lugo, we'll visit the towers of Saint Mary's Cathedral instead of the museum where you'll enjoy spectacular views of the whole city!

Wheelchair accessible. An accompanying person is required. This must be indicated in the reservation.

US$ 17.80
Free cancellation up to 48 hours before the service starts
Book

Chess board in Praza Maior in Lugo.

Brilliant. Very interesting. We have learnt a lot. Jessica, our guide has been a great host who knows the city very well and tells everything with love of who is from the land. Highly recommended. Opinion translated. Show original.

9.50 / 10 34 reviews
Discover the incredible natural monuments of As Catedrais Beach on this tour from Lugo. You'll also explore the beautiful historic town of Ribadeo!
US$ 106.80
Book
like

10 / 10 1 review
From its foundation as a Roman settlement to its Medieval heritage, Lugo's historic centre is full of fascinating places to discover on this private tour.
US$ 77.10 per group
Book
like