Cervantes, Lope, Velázquez... discover the streets and stories of the Spanish Golden Age of literature and art on this guided walking tour of Madrid. 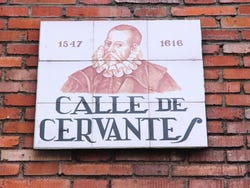 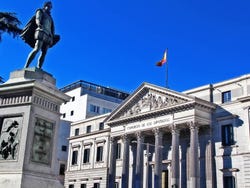 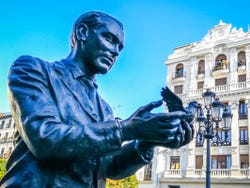 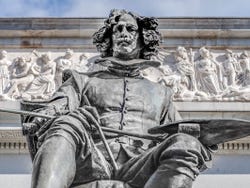 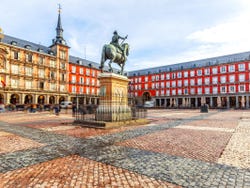 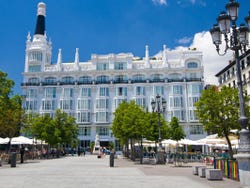 As Miguel de Cervantes Saavedra once wrote, “he who reads much and walks much, goes far and knows much,” and we'll pay homage to this maxim on this fascinating walking tour of Madrid. We'll start in the Plaza Mayor at 2:30 pm, and from there, our expert guide will take us into the Villa and Corte area of the city. In the 17th century, this area was home to two of the greats of Spanish literature: Lope de Vega and Miguel de Cervantes Saavedra. Did you know that despite living just a couple of minutes apart, these two literary figures loathed each other?

We'll discover more intriguing stories as we wander through the Barrio de las Letras (literary neighbourhood), passing by the writers' old houses, and those of others, as in the height of the Golden Age this area was home to other greats such as Francisco de Quevedo and Luis de Góngora.

Next, we'll head to the Plaza de Santa Ana. This beautiful, popular square is not only where the Teatro Español theatre lies, but outside there is also a statue of acclaimed 20th-century poet and playwright Federico García Lorca, who was shot by Nationalist forces during the Spanish Civil War. We'll move from one statue to another, this time to one of Miguel de Cervantes, which stands proudly outside the Spanish Congress of Deputies. Interestingly, this was the first statue in Madrid that was not a religious or political figure.

The Spanish Golden Age didn't just generate masterworks of literature, but also art, especially painting. We'll pause outside the world-famous Museo del Prado to admire the sculpture of Diego Velázquez and to discover some interesting facts about the Madrid-born painter. Then we'll end our guided walking tour close to Retiro park, referred to by locals as the 'green lung' of the city centre, back in the golden age of literature this lay on the outskirts of Madrid.

US$ 16.50
Free cancellation up to 6 hours before the service starts
Book

Excellent guide (Joaquin) who was very informative and good fun. Saw many beautiful parts of this fantastic city. Can recommend it highly.

Pedro has been a very good guide, he has made the visit enjoyable and very interesting. Thanks Pedro, excellent and enriching afternoon. Opinion translated. Show original.

9.30 / 10 292 reviews
Take a free walking tour of Madrid and discover its most emblematic areas, monuments and buildings accompanied by a local bilingual guide and learn about its history and legends.
Free!
Book
like -38%

9.70 / 10 73 reviews
Visit three of the most beautiful and historic cities in Spain in one day on this day trip to Toledo, Segovia and Ávila from Madrid.
US$ 147
Book