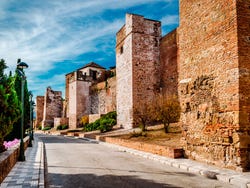 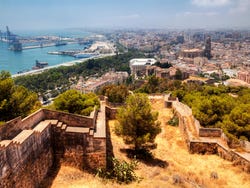 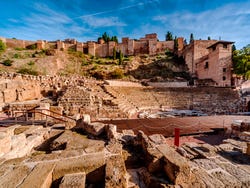 Having started the tour at the Crystal Pyramid, in the heart of Malaga's historic centre, you'll make the brief stroll over to the Visitor's Centre of the Teatro Romano, or Roman Theatre, located in Calle Alcazabilla.

Malaca, as the town was known during Roman Hispania, was home to extensive infrastructure dedicated to entertaining the public. Thanks to the informative visitor's centre, you'll get to know the history of the city's ancient customs and architecture, of which the Teatro Romano, Malaga's oldest monument, is undoubtedly a highlight.

Next to the centre you'll find the theatre's ruins, whose origins incredibly date back to the first century BC. As you explore its different levels and the various theatre areas that are preserved to this day, you can imagine the ancient Roman performances on the stage.

On the hill behind the theatre, overlooking its ruins, you'll find the Alcazaba, where your tour will make its next stop. This magnificent fortress, constructed in 11th century Islamic Iberia, was actually built using some of the materials from the then-abandoned Teatro Romano. The Alcazaba, which was also a residential palace, is a prime example of typical Al-Andalus architecture. Marvel at its stunning patios and gardens, and the intricate details of its archways and tiling.

You'll also be able to visit the battlements of the Alcazaba citadel walls. From here, you can enjoy fabulous panoramic views over the city, including of the nearby Gibralfaro Castle, another remnant of the area's Moorish history.

Following your guided tour of the Alcazaba, the tour will finish back in the centre of Malaga.

Changes to the tour

The Roman Theatre is closed on Mondays, so we won't be able to enter the monument on this day. We'll discuss the monument from outside.

Entrance to the Roman Theatre.

Entrance to the alcazaba.

Visit to the Gibralfaro castle.

The tour was great, plenty of interesting information from Estelle our guide and beautiful views at the top. Thanks for the tour!

The guide put "passion" in the tour. A luxury. Onart explained everything to us in a very pleasant way. Opinion translated. Show original.

Immerse yourself in the history of Malaga on this free walking tour of the ancient Roman theatre and the historic Alcazaba, a fortress from the Muslim period.

8.20 / 10 67 reviews
Explore Malaga's historic centre with a local guide. Get to know its most important streets and monuments in a fun and entertaining way. What's more, it's FREE!
Free!
Book
like

9.60 / 10 9 reviews
Visit one of the most enchanting cities on the Costa del Sol with this Tuk Tuk tour of Malaga. Discover all its hidden charm in an exciting way!
US$ 96.40 US$ 53 per group
Book