Climb onboard the fantastic Montevideo sightseeing bus and take a fantastic panoramic tour of the city's iconic landmarks. You can hop on and off as many times as you want at any of the designated stops making it easy for you to explore the capital of Uruguay. 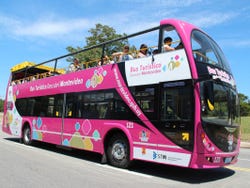 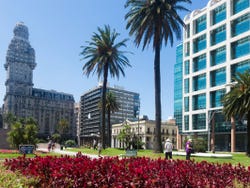 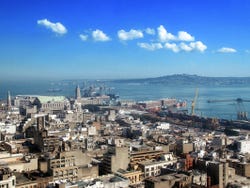 The tourist bus of Montevideo passes the most important locations in the beautiful capital of Uruguay. The route, which starts at the wonderful Mercado del Puerto market, has a total of 11 stops. Among them are the Artigas Boulevard, the Football Museum, and Rambla Franklin D. Roosevelt, which forms part of the huge Rambla of Montevideo which stretches out along the coastline.

In the following link you can see a map with all the stops of the route:

Onboard the bus you will also have an audio guide in English and other languages.

Your ticket for the Montevideo bus tour allows you to hop on and off as many times as you want at any of the stops, during the period of the ticket.

When making your reservation you can opt for one of the following two types of tickets:

The timetable of the Montevideo tourist bus varies depending on whether you travel from Monday to Friday or on weekends.

In the following links you can consult the schedules according to the seasons:

The tour is carried out with an audio guide in English.

24 or 48 hour ticket for the Montevideo tourist bus, according the option chosen.

Onboard audio guide in English and seven other languages.

If there are still places available, you can book until the previous day (local time in Montevideo).

from
US$ 17.80
No hidden fees or surcharges
Book

9.70 / 10 19 reviews
Parque Rodó park in Montevideo is one of the most iconic locations in the Uruguyuan capital.
Free!
Book
like

Dinner Show at the El Milongon

9.70 / 10 6 reviews
Immerse yourself in the rhythms of Uruguay with this complete meal in the El Milongon restaurant, where you'll enjoy unique folkloric performances!
US$ 46.66
Book
like

10 / 10 1 review
Feel the rhythms of Montevideo Carnival when you witness one of its most famous street parades - the 'Desfile de Llamadas' (The Calls Parade).
US$ 60
Book