Home to countless treasures of Antiquity, Delos is one of the most important historical sites in Greece. Discover its incredible legacy on this excursion from Mykonos.

Home to countless treasures of Antiquity, Delos is one of the most important historical sites in Greece. Discover its incredible legacy on this excursion from Mykonos. 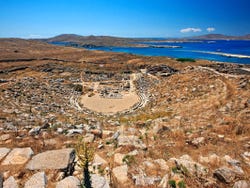 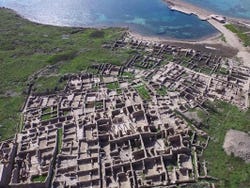 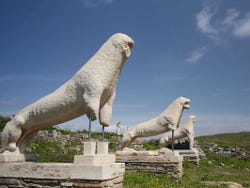 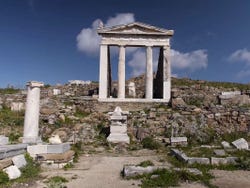 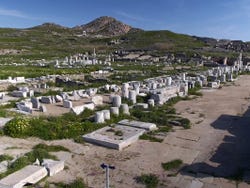 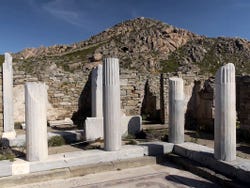 We'll meet at the port in Mykonos town at 10 am. Then we'll set sail aboard a ferry heading west. After cruising over the Aegean Sea for approximately 40 minutes, we'll disembark on the island of Delos.

The tour will begin around one of Greece's most significant historical, archaeological and mythological enclaves, heading over to the Museum and Archaeological Site of Delos on foot.

Following the explanations of your guide, you'll explore the ancient theatre of Delos and its surroundings, an area that UNESCO has designated a World Heritage Site for its historical value. We'll explore the former houses of Delian, Dionysus, and Cleopatra.

Then we'll climb the hill to see the old Delos theatre. You'll learn about the shows staged in this venue, which dates back to the third century BC, and which once sat up to 5000 people.

The tour will continue to the Apollo Temple to see the famous Delos lions, a terrace of marble sculptures dedicated to the god Apollo. The intimidating collection of feline statues was once much larger, but several were stolen by one of the Mediterranean empires over the course of history. Can you guess which? The answer might surprise you...

After exploring more of the island's fascinating remains, like the House of the Dolphins and the Doric Temple of Isis, you'll put the finishing touch on your tour with a visit to the Delos Archaeological Museum. Amongst other highlights, the museum has a large collection of well-preserved mosaics dating from Antiquity.

At the end of your guided tour of this unmissable archaeological treasure, you'll take the return ferry to Mykonos town, where you'll arrive around 1:30 pm.

This tour is available in English on Mondays, Fridays and Saturdays. For the rest of the week, it's available in other languages.

Return ferry between Mykonos and Delos

The activity is good but we do not see it necessary to make a huge queue to collect the reserved tickets and that it starts only half an hour before Opinion translated. Show original.

Very good experience! The guide with very good explanations! : D We were a small group of 5 people which allowed us to attend to their explanations despite the fact that the headphones that were provided to us to hear the guide did not work. Recommendable! Opinion translated. Show original.

We have had a great day with Georgia, we have learned a lot, about Delos and about all of Greece. 100% recommendable Opinion translated. Show original.

No rating yet
Paradise beaches, sparkling turquoise seas, delicious Greek food, a traditional caïque boat... is there any better way to experience the south coast of Mykonos?
US$ 91.10
Book
like

10 / 10 1 review
Delos and Rhenia Islands are home to incredible history, archaeology and nature. Let yourself be captivated by their charm on this cruise from Mykonos.
US$ 96.40
Book
like

No rating yet
Treat yourself to an unforgettable experience on your trip to Mykonos and go parasailing! The adrenaline rush and magnificent views will take your breath away!
US$ 68
Book