Discover the history of the oldest African American neighbourhood in the United States when you take our fantastic tour of Tremé. You'll stroll through the pretty, tree-lined streets where Jazz was born, and see the famous Louis Armstrong Park and Congo Square.

Discover the history of the oldest African American neighbourhood in the United States when you take our fantastic tour of Tremé. You'll stroll through the pretty, tree-lined streets where Jazz was born, and see the famous Louis Armstrong Park and Congo Square. 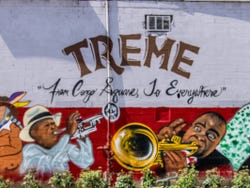 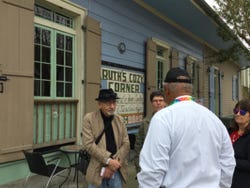 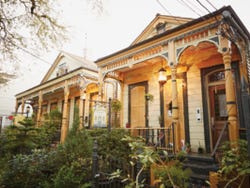 We'll meet up in the morning on St Philip street in the heart of New Orleans before beginning our fantastic guided tour of the Tremé neighbourhood. For two hours, we'll explore the historic streets of the oldest African American neighbourhood in the United States. This district was built in the 18th-century, to house both Caucasians and free persons of colour, when freedom was just a dream for most African Americans in the country.

We'll visit St. Augustine's Catholic Church, the first black catholic parish in the United States. Discover how the Spanish law of Coartación offered slaves a stake in society and how the growing free black population was augmented by refugees from Spanish Cuba, with the neighbourhood's mix of black and white, and enslaved and free people influenced the political, economic and cultural events that would shape black America and define the New Orleans we know today.

We'll stroll through the streets lined with traditional 'Creole cottages' to admire the vernacular architecture which characterized the buildings of the deep south at the turn of the 19th-Century. In Louis Armstrong Park, we'll pay tribute to the genius of jazz and you'll hear all about the origins of this revolutionary music and how it was born in Treme.

After two hours finding out about the origins of New Orleans and its Afro-American culture.

8 / 10 2 reviews
The New Orleans hop on hop off bus is a practical way to tour the City of Jazz. You can get on an off the bus at any of its stops, to explore the city at your o
US$ 39
Book
like

8.70 / 10 3 reviews
A magnificent mansion, a beautiful oak tree tunnel, and a dark chapter in American history, all await you on this tour of the Oak Alley plantation.
US$ 67
Book
like

No rating yet
Discover part of Louisiana's past on a visit to a historic colonial mansion on this excursion to the Destrehan Plantation from New Orleans.
US$ 62
Book