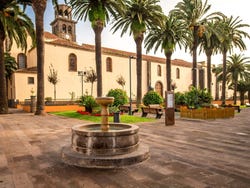 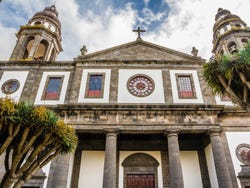 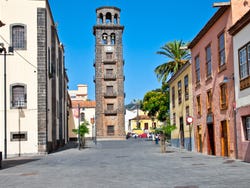 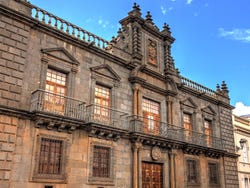 We'll begin our guided tour of La Laguna in its central square Plaza del Adelantado. We'll delve straight into our guided tour and immerse ourselves in the history of the town, which has the privilege of being one of the 15 Spanish cities declared a World Heritage Site.

During the tour we'll visit the most emblematic areas of the old town and admire the colonial architecture. We'll head up Calle Obispo Rey Redondo, one of the city's main streets, to La Laguna Cathedral. We'll go inside to admire its magnificent works of art, such as the elaborate neogothic altarpiece dedicated to the Virgin of Carmen.

We'll continue on our tour of the city's main monuments, such as the Leal Theatre and the Iglesia de la Concepción church. Its Tuscan-style bell tower, which dates from the 17th century, is 27 metres high.

Our next stop will be at the stunning Baroque building of the Casa Salazar, an old palace with a fascinating history... Our tour will end in the Plaza del Cristo, home to the Town Market of La Laguna, whose stalls offer a wide range of crafts and gastronomy from Tenerife.

Map and guide of La Laguna.

Entry to La Laguna Cathedral (5 EUR per person, around 6 USD)

US$ 8.20
Free cancellation up to 24 hours before the service starts
Book

An excellent guide, no time to finish the route all kindness and knowledge. We spent the morning very happy Opinion translated. Show original.

Entertaining The guide told us a lot of interesting things and did not mind taking the tour a bit longer because of all the questions we asked. Opinion translated. Show original.

I recommend doing it. The guide Mercedes is great doing the route and explaining everything, it is super enjoyable. In principle, the route was 1.5 hours and in the end we have been 3, not a detail has been left to tell us ... Opinion translated. Show original.

9.50 / 10 420 reviews
Get lost in the beautiful laurel forests of north Tenerife with this guided hike through the Anaga Rural Park.
US$ 17.50
Book
like

No rating yet
Discover the city in northern Tenerife with this La Laguna Free Tour. This walking tour is an ideal way to get to know its history and main points of interest.
Free!
Book
like

No rating yet
Discover the winemaking culture of Tenerife with a winery tour and tasting, and explore the picturesque towns of La Orotava and Puerto de la Cruz.
US$ 70.10
Book