Discover the ancestral traditions of the Mexican indigenous communities of San Juan Chamula and San Lorenzo Zinacantán on this tour from San Cristóbal de las Casas. 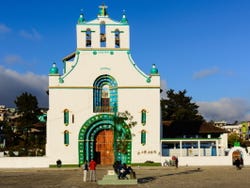 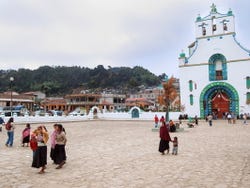 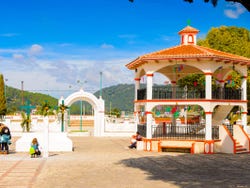 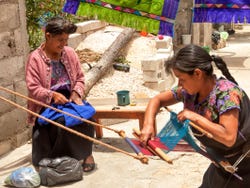 Having been picked up from your hotel in San Cristóbal de las Casas, you'll set off to the small Chiapas towns of San Juan Chamula and San Lorenzo Zinacantán, located to the west of the city. Both of these vibrant communities provide an incredible snapshot of indigenous pre-Hispanic culture, which you'll delve into on your guided tour.

Arriving in Chamula, you'll visit the famous Temple of San Juan Bautista. While this colonial-style church originally dedicated to John the Baptist does not appear to be anything out of the ordinary, you'll find yourself a whole world away when you enter inside. You'll be captivated by the contrasts between Catholic religious icons and decorations and the indigenous religious traditions.

After visiting San Juan Chamula, you'll next make the journey to Zinacantán, where you'll witness Mexico's pre-Hispanic roots yet again as you visit the town and the Church of San Lorenzo.

What's more, you'll have the opportunity to learn all about the work of the women of Zinacantán, who weave uniquely beautiful textiles with a special loom attached to their belts. Having admired the traditional hupiles (ponchos) and blankets, you'll then head to the home of a local family where you'll be invited to sample a homemade liquor typical of the region.

At the end of your guided tour, you'll have free time to explore the lively markets selling local handicrafts, before returning to the centre of San Cristóbal de las Casas for around 3 pm.

This tour departs from San Cristóbal de las Casas. If you're staying in Tuxtla Gutiérrez, you can also book this day trip to San Juan Chamula and Zincantán from there.

I enjoyed the tour. I appreciated being picked up and that all the details were taken care of. It was good value for the money. I loved talking with others in the van. The highlight was being able to experience the activities in San Juan Bautista church in San Juan Chamula. That was so unique and interesting! There was some waiting involved. We did have to walk short distances on uneven ground [which is just the way it is]. We were dropped at the square in San Cristobal afterwards.

6.6 / 10 7 reviews
Feel the magic of ancient Mayan ruins in Palenque and explore the spectacular waterfalls of Agua Azul and Misol-Há on this tour from San Cristóbal de las Casa.
US$ 57
Book

No rating yet
Piercing turquoise lagoons and awe-inspiring waterfalls: immerse yourself in the beautiful nature of Chiapas on this tour of Montebello Lakes and El Chiflón.
US$ 48
Book