Meet giant tortoises, immerse yourself in nature and enjoy the stunning beaches of Santa Cruz on this four-day Galapagos Islands adventure. 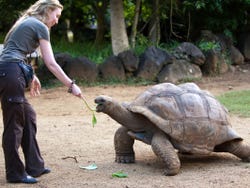 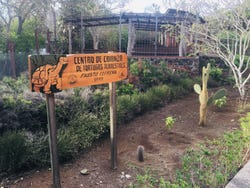 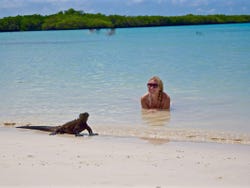 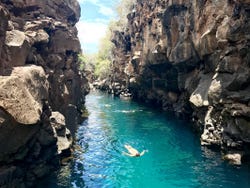 On arrival into Seymour Airport on Isla Baltra, you'll be picked up and taken to the port located on the south of the island, where you'll take a ferry to Santa Cruz Island. The crossing on the Itabaca Canal, which takes just 10 minutes, will give you your first glimpse of the coastal landscapes of the Galapagos archipelago. The intense turquoise of the sea makes the beautiful beaches seem like they're out of a dream.

Back on dry land, you'll begin exploring the northern part of the isle of Santa Cruz, home to spectacular lava tunnels. You'll stop at the Galapagos tortoise reserve, where you'll get to meet these enormous animals, emblematic of the archipelago, in one of only two places in the world to which they are native.

Continue your tour around Santa Cruz, visiting the Charles Darwin Research Station. His work has become a worldwide reference in science and natural history, but do you know everything about the British naturalist's travels to the Galapagos Islands? Your guide will reveal the most curious anecdotes.

At the end of your first day, you'll be taken to your hotel on the island's capital: Puerto Ayora.

After an energising breakfast at your hotel, you'll set off on a short trek. After approximately 40 minutes walk, you'll reach a place well worth the exertion: the Tortuga Bay beach, one of the most beautiful spots on the archipelago. Here, you'll have free time to relax, sunbathe and swim on Santa Cruz's paradise coastline.

You'll spend the afternoon seeing Bahía Tortuga from a different perspective, cruising around the bay in a yacht. The boat trip will take you to a tiny island inhabited with adorable sea lions and you'll also visit the Tunnel of Love, a natural rock formation whose name isn't an accident...

Following your yacht cruise, you'll head back to Puerto Ayora where you'll be dropped off at your hotel.

Important: this activity is only available on Mondays, Wednesdays, Fridays and Sundays.

Following breakfast at your hotel, you'll have the whole of your third day free to explore everything Santa Cruz has to offer at your own pace.

Day four of your tour will see you eating an early breakfast before being taken to the north of Santa Cruz, where you'll visit a coffee plantation. After learning all about the coffee production process, you'll head over to the Itabaca Canal port. Here, you'll hop aboard the ferry to Baltra Island, where you'll be taken to the airport after a fantastic four days exploring the Galapagos archipelago.

This Galapagos tour package includes three nights' bed and breakfast in Puerto Ayora, the capital of Santa Cruz Island. When making your reservation, you'll have the choice between booking standard or superior hotel accommodation:

Please note: the indicated price per person is based on two people sharing a double room, however, triple and quad rooms are available. Please contact us for a personalised quote and to reserve these options.

Pick up and drop off at airport.

Visit to a tortoise reserve.

Visit to a coffee plantation.

You can book up to 15 days before (Santa Cruz Island local time) if there are still places available.

from
US$ 535
No hidden fees or surcharges
Book

6.60 / 10 10 reviews
Discover the largest Galapagos isle on this day trip to Isabela Island, a paradise of volcanic landscapes, mesmerising turquoise seas and incredible wildlife.
US$ 170.30
Book
like

10 / 10 1 review
North Seymour Island is a haven for incredible wildlife: discover a world of sea lions, iguanas and different birds on this day trip from Santa Cruz Island.
US$ 299
Book
like

No rating yet
Giant iguanas, sea lions and spectacular volcanic landscapes: discover the magic of Santa Cruz Island on this unforgettable boat cruise!
US$ 65
Book