Discover magnificent modernist architecture in the beautiful town of Comillas. On this trip, you'll get to see breathtaking buildings such as the Gaudí designed villa El Capricho.

Discover magnificent modernist architecture in the beautiful town of Comillas. On this trip, you'll get to see breathtaking buildings such as the Gaudí designed villa El Capricho. 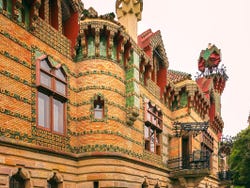 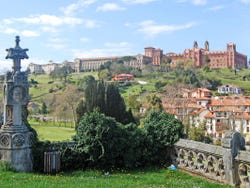 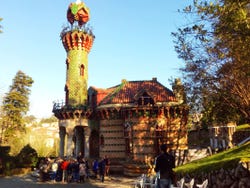 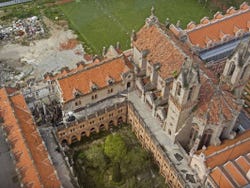 After picking you up at 9:30 am from your hotel or the meeting point, we'll set off for Comillas. Along the way, we'll stop at the Bosque de las Sequoyas forest in Cabezón de la Sal to marvel at its 40-metre tall trees.

45 minutes later we'll arrive at our destination. Did you know Comillas became a summer destination for the Castillian aristocracy in the 20th century? We'll visit the ancient Seminario Mayor, located on top of a hill where we'll enjoy spectacular views of the town and the Palacio de Sobrellano palace.

Next, we'll head to the Villa Quijano, more commonly known as the Capricho de Gaudi. This mansion from the artist's orientalist period is one of just three buildings he designed outside Catalonia.

Our tour will end with a panoramic bus tour of Comillas. We'll see the majestic Ángel Exterminador sculpture that stands guard over the ancient cemetery. We'll also visit the centre of Comillas to discover the Fuente de los Tres Caños​ fountain.

At the end of the trip we'll head back to Santander and the activity will end at the starting point at 2 pm.

Transport in a minibus.

Entry to the Capricho de Gaudi.

US$ 61.20
Free cancellation up to 24 hours before the service starts
Book

It more than met expectations. Very good work of the guide Rafael. Very enjoyable and ready for us to be very comfortable throughout the excursion .. very good signing for civitatis. Opinion translated. Show original.

It has been fantastic. Rafa, our guide, explains everything with very entertaining stories that entertain you, always watching out for us. Highlight your human quality. Highly recommended Opinion translated. Show original.

Super interesting activity. And our guide Gabriela has done much more with her explanations and her good work. Opinion translated. Show original.

Rafa the very nice guide. Except for the rain that did not cease, a highly recommended excursion. Opinion translated. Show original.

10 / 10 5 reviews
Experience the wonders of the natural world on this excursion to Cabarceno from Santander. Discover the joys of this nature park where the animals live in semi-freedom.
US$ 77.10
Book
like

10 / 10 2 reviews
Discover the El Soplao cave, one of nature's geological wonders and enjoy unique views of the Cantabrian landscape.
US$ 62.30
Book
like

No rating yet
Discover Cantabria's breathtaking nature on this tour of the Puente Viesgo Caves and the Valles Pasiegos valleys.
US$ 87.30
Book