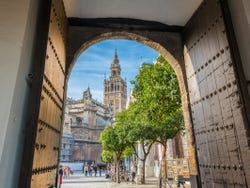 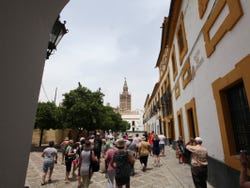 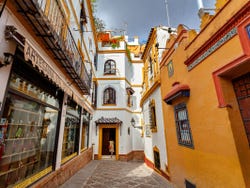 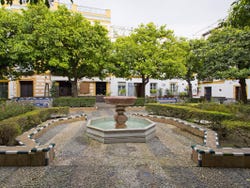 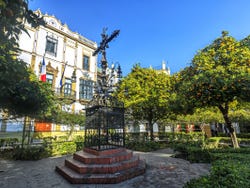 Seville is full of incredible monuments, from the Giralda to the Triana Bridge to the Plaza de España. The Andalusian capital has endless places to see, and each corner of the city gives visitors a new glimpse of the magnificent cultural heritage and diversity for which the city is known. This guided tour will take you deep into the Santa Cruz district, allowing you a unique experience of Seville's former Jewish Quarter.

Having met your expert English-speaking guide, you'll begin your walking tour through the streets of the famous Santa Cruz district. Firstly, you'll pass through the Patio de Banderas, a square located within the walls of the Alcazar, Seville's Medieval fortress.

Continue exploring the area, strolling through the Jardines de Murillo, a beautiful park given to the city by King Alfonso XIII. You'll discover how far the old Jewish Quarter extended within the city as you wander through its winding lanes and hidden corners, hearing all about its history thanks to your guide.

Next, you'll make a stop at Plaza de la Susona before reaching Plaza de Doña Elvira, one of the most charming areas in Seville's Santa Cruz district, where your guide will reveal the love story that surrounds this pretty orange-tree filled square.

Finally, you'll arrive at the Plaza de Santa Cruz, where the neighbourhood's most important streets meet at the location of the former Santa Cruz Church - demolished in 1814 - which was originally built upon a historic Synagogue.

View complete description
US$ 12.10
Free cancellation up to 24 hours before the service starts
Book

9.40 / 10 58 reviews
Explore the beautiful Guadalquivir river in a fun way when you rent a kayak. Don't miss this opportunity to enjoy Seville from a unique perspective!
US$ 18.20
Book
like

10 / 10 1 review
Enjoy Seville in a unique, fun way when you rent a paddle surfboard. Combine sport and sightseeing as you drift down the beautiful Guadalquivir river.
US$ 18.20
Book