Explore the streets of Varanasi in a tuk tuk, the best way to delve deep into the spirit of the city and admire its most iconic landmarks. A fun and undoubtedly original tour!

Explore the streets of Varanasi in a tuk tuk, the best way to delve deep into the spirit of the city and admire its most iconic landmarks. A fun and undoubtedly original tour! 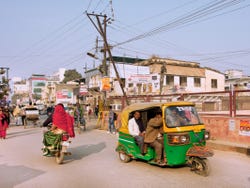 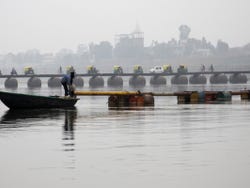 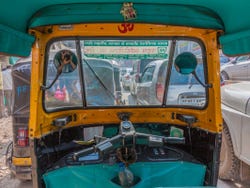 After meeting in the heart of Varanasi, you'll hop into tuk tuks and get ready to start your adventure of the sacred city.

Over two hours, you'll be driven around the most symbolic places in Varanasi, considered one of the holiest cities in the world by followers of Hinduism. See famous monuments including Saint Thomas' Church and the Kashi Vishwanath, one of the twelve Jyotirlingas, the holiest of Shiva temples, which is also known as the "golden temple" for its incredible gold-plated domes.

You'll also see Jantar Mantar, one of five observatories constructed under the order of astronomy fan Maharaja Jai Singh II. From here, you'll head to Dashashwamedh ghat, where you can experience how the locals live on the banks of the river Ganges.

Delve deep into the chaotic centre of Varanasi next, where you'll drive up to Baba Keenaram Ashram, a famous Hindu meditation centre, before crossing the Ramnagar bridge, from which you'll be able to enjoy panoramic views of the city.

On the other side of the Ganges, you'll reach the Ramnagar Fort, an extremely important site in Varanasi. The crumbling 17th century fortress was constructed on a hill overlooking the river as the home of the city's royal family. The current Maharaja - although this title is officially no longer used - still uses it as a place of residence.

Finish your tour with a visit to the tomb of Lal Khan, a Mughal noble. The Muslim mausoleum, built in 1773, is a stunningly beautiful example of Mughal architecture and is considered one of the true gems of Varanasi. Your tour will end at Ramnagar Fort.

7.80 / 10 9 reviews
Varanasi is the holiest of the seven sacred cities of Hinduism. Discover its secrets on this free walking tour of the spiritual capital of India.
Free!
Book
like

10 / 10 1 review
If you like photography, this walking tour is perfect for you: see the most picturesque places in Varanasi and capture them in all their splendour.
US$ 10.70
Book
like

No rating yet
Visit the most important monuments in Varanasi on this private tour of the city with an exclusive expert guide for you and your family or friends. What are you waiting for?
US$ 46.90 per group
Book